The Basilica of Assisi was badly damaged by an earthquake that happened September 26, 1997. Part of the vault collapsed, killing four people inside the church and carrying with it a fresco by Cimabue.

Assisi also has been built on a hill, the Asio. At its top lies the Rocca Maggiore fortress, below the town of about 25,000 inhabitants. All buildings are constructied in the same style and with the use of limestone.

This is really the busiest place so far on my journey. Besides Italian day trippers, there are also buses full of schoolchildren, Polish and Chinese. Are they tourists or pilgrims? Assisi is a pilgrimage site because of Saint Francis. This poor little man founded a brotherhood focused on poverty, simplicity and charity. Nuns and monks are a common sight on the streets (clothed in gray, black and brown). But there are also plenty of souvenir shops to satisfy the tourist category. I start my visit at the Santa Chiara Church. It is named after Clara, the companion of Francis. The ceiling of this church is completely painted with frescoes. Also there are wooden crosses with images of Christ. In the very colorful crypt below stands her tomb. There are also relics to see of Clara (clothing and hair). 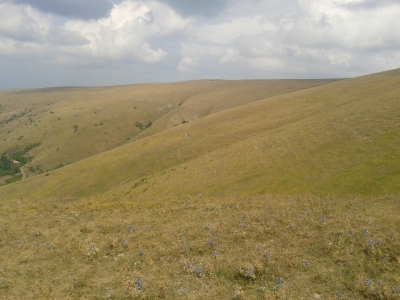 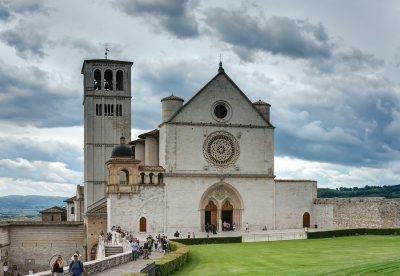 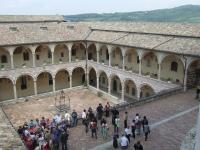