I finally gave up on public transport in Corsica & Sardinia at Barumini: there's no way to do it on a day trip by bus or train. Not that the experience of renting a car for a day was such a pleasure: I found the Hertz office at Cagliari-Elmas airport understaffed at 9 am, their printer did not work so they had to write my contract by hand (oh, I so wish for a full digital transformation of car rental companies) and the directions where to pick up my car were immensely vague. I guess the lady behind the desk had lost her sense of direction because of the stress. Together with a German tourist I went on a thorough search for our cars, which we finally spotted after 20 minutes using a high vantage point. It turned out that there is an additional parking lot just in the shadow of the large parking garage. All these delays meant that I could throw overboard the plans that I had to visit another site or two besides Su Nuraxi di Barumini. If you have your own wheels and a full day to spare from Cagliari, you could easily extend a trip to Barumini to the Sulcis Iglesiente TWHS and the Temple of Antas.

Fortunately, the visitor experience at Su Nuraxi di Barumini is exemplary. There’s free parking and a (book) shop. The 14 EUR entrance fee is steep, but in addition to entry to two museums in town it also provides employment to the guides and tours are frequent. Together with a German couple I was given a tour in English within 20 minutes of my arrival. A guide is really necessary here because otherwise it’s the proverbial ‘heap of stones’. The prehistory of both Sardinia and Corsica is an interesting subject to contemplate while travelling in this part of the Mediterranean. There are findings from the Paleolithic in Sardinia and early Sardinians crossed the Strait of Bonifacio to Corsica around 9000 BC. In Corsica I had already visited the archaeological sites of Filitosa and Cuccuruzzu-Capula. Both are really fun to explore, as they cover large areas and display those cute menhirs. These sites pre-date the Nuragic civilization, of which Su Nuraxi di Barumini is the showcase. The stones that define the image of Su Nuraxi di Barumini are not all related to the nuraghe / tower. Much of them belong to a later settlement which grew in the shadow of the then ruined tower and re-used stones from it. The guide brought a picture book showing the original shape of the tower. It looked like a medieval castle, with high ramparts and watchtowers. Stairs and plateaus were made of wood, which (except for one plank) have not been preserved. As with the other nuraghi in Sardinia, the top is gone. A modern wooden staircase has been installed to climb and look into the 3-storey nuraghe itself. I found the solid building style particularly striking when seen in close up. The stones were stacked loosely, cement was still unknown. Smaller stones were used towards the top. Looking down from the top you see a courtyard with a well. 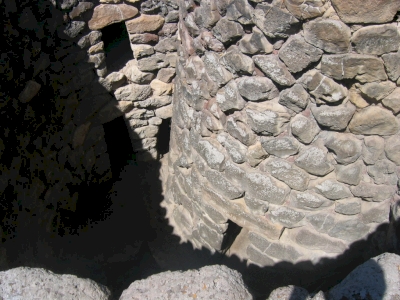 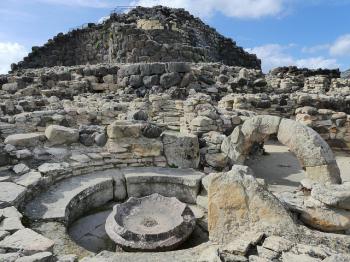 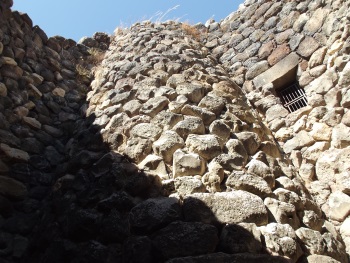