The twin monasteries are located in San Millán de la Cogolla in La Rioja. They owe thier existence to the holy man Millán, who settled here in the 6th century and founded the first 'monastery' at this spot.

Suso is the older of the two monasteries, and it is the site where phrases in the Spanish and Basque languages were written for the first time. A monk had put annotations in Spanish and Basque next to a Latin text. The codex in question was subsequently preserved in the monastery library at Yuso before being moved to its current location in Madrid.

Yuso Monastery is an impressive complex when you first arrive. And popular with the tourists as well. Entrance is only via a guided tour, which costs 4 EUR. The tour (with ca. 40 people) lasts about an hour. It’s a tiring affair to non-Spanish speakers, as the guide will stop often for long talks. It will take you through all the important rooms however. Especially the Sacristy is a feast of paintings, furniture, frescoes and a golden altar. The church is under restoration at the moment, and all the decorations are packed in paper (as if the artist Christo had stopped by). Yuso’s older sister, Suso, is located uphill. When you’ve bought a ticket, a bus will take you there to go on a guided tour. What’s left of Suso is only the church. So it’s only one room, quite tiny. This guide also starts a long story before we can enter the building. No photos are allowed inside, but this is not strictly reinforced. The interior is almost empty, except for graves. What I liked most was the medieval graffiti at the outside of the building. The hotel restaurant gets a definite thumbs down at Tripadvisor, and also their breakfast is overpriced at 11 EUR. So I skipped both and only stayed for the night. The village of San Millan does have at least two other restaurants at the central square, which seem to be open while the tourists are there (until 7 p.m.). I ate a good value menu at the more upscale restaurant of the two. 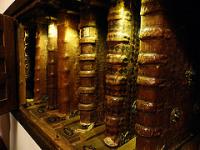 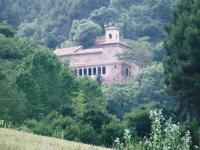 The spanish language started in these monasteries. The most ancient document with some different words (not latin) are from here. Important cultural site for the spanish language/people. Interesting only and should be visited if you are nearby.