Click here to see more of my photos of Zamosc 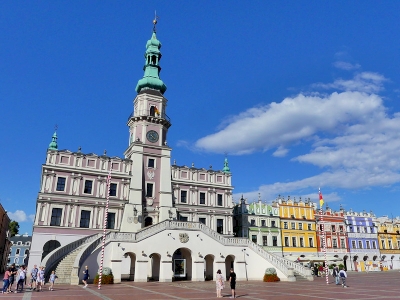 I visited this WHS in August 2020 after a never ending drive due to roadworks and deviations. It will always have a special place in my memory as by visiting it I completed Poland's WHS and reached my 500th WHS milestone.

Zamosc is quite a small WHS and its main square can be compared to Telc's in Czechia or to Bardejov's in Slovakia. While the latter lacked any outstanding element, the former was more complete with excellent varietes of townhouse facades all around the square. Only a few 'Armenian' town houses next to the town hall (photo) are on par with Telc's townhouses. On the other hand, the old town of Zamosc has a unique layout and an outstanding implementation of the theory of the “ideal town” based on a plan of a human figure. The Zamoyski Palace was the head, the Zamoyski Academy and the Collegiate Church were the lungs, the Town Hall was arranged at the heart, and Grodzka Street formed the backbone running from the Palace to Bastion VII. The bastions embodied elbows, knees and hands to be used for defence. This concept was developed by the Italian architect Bernardo Morando and implemented by Jan Zamoyski, the founder of Zamosc.

I really enjoyed walking around the town's fortifications at different times of the day. For a panoramic view of the town's layout, it is possible to go up the cathedral tower for 5 zloty. Entrance to the rest of the cathedral complex is free. Another church worth visiting lies in the opposite direction of the cathedral is the former Colleagiate church known as the Cathedral of the Resurrection and St. Thomas the Apostle, an excellent restored example of Polish Mannerism. A hidden gem I confess I knew nothing about prior to my visit is the old synagogue (quite expensive to visit the small interior by Polish standards but worthwhile nonetheless).

Any direction you pick to start exploring this town will inevitably lead you to the Grand Market Square with the Town Hall, which boasts a 52 metre clock tower, integrated into a line of tenement houses.  The square is one of the most magnificent 16th century square in Europe, based on the ideal 100 x 100 m square. It is surrounded by bourgeois tenement houses with arcades formerly owned by Armenian townsmen. The house with a red facade and an angel statue houses the Zamosc Museum. This year happens to mark Zamosc's 440th anniversary so a huge yellow Zamosc 440 sign was placed near the middle of the square. A marble or stone UNESCO WHS inscription plaque can be found just beneath the town hall clock tower. 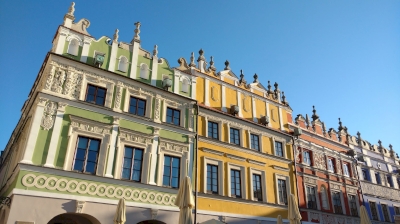 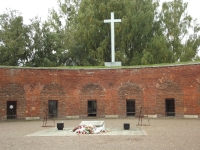 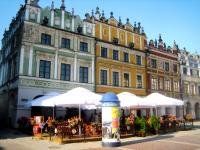 Mannerism
Renaissance
Italian Architects outside Italy: Bernardo Morando
Ideal City: "A unique example of a Renaissance town in Central Europe, consistently designed and built in accordance with the Italian theories of the "ideal town," on the basis of a plan which was the result of perfect cooperation between the open-minded founder, Jan Zamoyski, and the outstanding architect, Bernardo Morando. (Wiki)
Star fort: Zamość Fortress

Built or owned by Germans: Rosa Luxemburg's House in the Market Square
Named after individual people: named after its creator Jan Zamysky