A few narrow streets and you're at the Plaza Mayor, where you'll get the first view of the magnificent gates, walls and towers of Caceres. The Torre del Bujaco is the most prominent one. You can climb it, and get a good overview over the historic centre. And have a good look at the numerous storks. They clearly like all those towers for nesting! The Old Town is very compact and a pleasure to navigate on foot. It holds historic buildings very similar in style and colouring. It has a museumish atmosphere, because only at the fringes there are houses where people actually live in. At one of the little plazas a folk music & dance group was performing, entertaining the numerous day trippers around. I ended my tour on a terrace in the sun, an appropriate ending to a pleasant afternoon spent in Old Caceres. 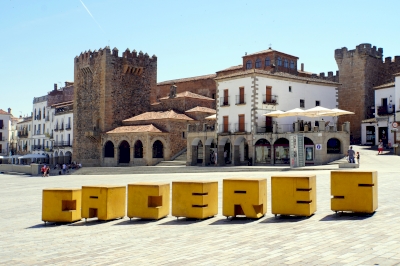 Dear friends!We love this town. We got there in Easter a couple of years ago by bike coming from Salamanca and we were surprised not only because of the monuments but for the processions... We live in Spain, but it was the first time we saw it!

I hope you need to come to Spain to visit more World Heritage Sites, so we can offer you our home. Un abrazo!!

I was there for six months as part of a university exchange program. I loved the city! It's absolutely beautiful, the paople are lovely and the scenery is amzing! Will be going there again when I am no longer apenniless student:)

This world heritage site is very special to me as I was born here.

If you visit old town in Caceres you'll feel as if you're back in the Middle Age.

Quiet town (but with well-known nightlife), lovely people, well worth a visit.

I visited this city twice. Is is one of my favorite places in Spain. The city walls surround several nice palaces. Caution, during the summer the temperature may be above 40 oC.

We visited in 1997 stayed at Hotel Iberia and had a wonderful time beautiful town lovely people.

We will be back!

France is felling thousands of tress shading the banks of its Canal du Midi, due to a canker stain plague decimating plants along the 17th century marvel of engineering (27.07.11)