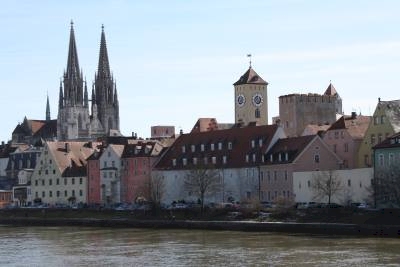 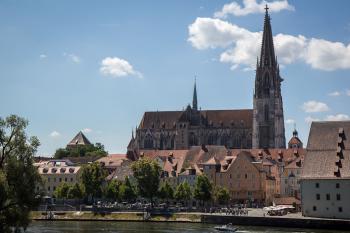 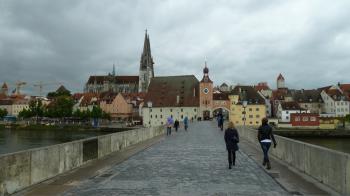 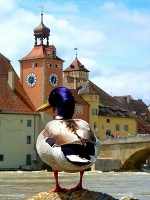 Well regardless of Nuremberg, I can say that Regensburg is a relatively dull town unlike many other colourful mediaeval towns in Germany (or even in Bavaria). Still there are two highlights: the stained glass at the local cathedral and the interior of the town hall, which I would really recommend visiting. It features the largest undomed hall for its time without supporting columns, which was a major engineering achievement.

The site has 45 connections

Breweries: Spitalbrauerei: 'The Spitalbrauerei (Hospital, Hospice or Almshouse Brewery) was founded in 1226, which makes it the City's oldest brewery, and the World's oldest Almshouse Brewery. Its address "At the Foot of the Bridge"
Salt: Salzstadl (1597), a warehouse for salt on Stadamthof
Forced labour during WWII: In the final months of World War II, in March and April of 1945 a subcamp of the Flossenbürg concentration camp was located in the city, with 460 forced laborers of various nationalities, 40 of whom died.