The park was formerly known as Greater St. Lucia Wetland Park. It was renamed into iSimangaliso Wetland Park effective from 1 November 2007. The word 'isimangaliso' is Zulu for 'a marvel'. On my first morning I entered via Bhangazi Gate, which leads you to the Eastern Shores ending at Cape Vidal. For the best part the drive goes through a savannah. Prominent inhabitants are the Greater Kudu (quite big indeed) and other cloven-hoofed mammals such as the Common Reedbuck. All loop roads from the main road were closed for maintenance, but the various viewpoints were accessible. They will give you views over the coastline, one that is remarkably similar to the all-too-familiar Wadden Sea.

This road ends at a wooded area, where two species of monkey play around. The Vervet Monkeys occupied their usual spot at the parking area, looking for any left-over food from human beings visiting the beach here. More special are the Samango Monkeys, who kept their distance. They’re a subspecies of the Blue (or Sykes') Monkey.

On the way back I stopped at the Catalina Bay lookout, probably the best viewpoint of this side of the park. It overlooks Lake St. Lucia. 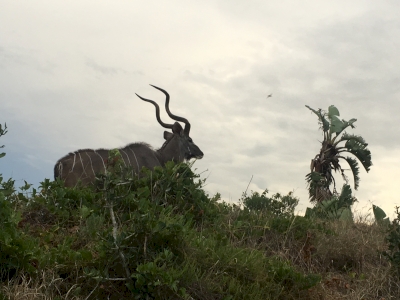 My visit to the iSimangaliso Wetland Park in the St. Lucia area was in February 2020.  This is summer and off peak for tourism.   We were a party of 3, and self driving.   The small town of St. Lucia was tourist friendly, affordable, and easy to navigate.  We had come from the Drakensburg area, so it was a long drive to St Lucia, but the roads are good and this posed no challenges.  We had one experience of being overcharged for snack items at a gas station.

The wetlands park covers a large area, and we visited the region over a course of 3 days.   The first visit was on the Hippo tour boat.   This was easy to book via our BnB host and pay with a credit card.  The boat tour people picked us up at our BnB and took us to the boat launch area.   The launch area was through a former industrial area, but we were on the water quickly and uneventfully.   Immediately, we paused to enjoy colorful yellow weavers building nests.   The flock was large and appeared to be thriving.  After the photos were taken, we headed upstream to the first pod of hippos.   The hippo pod was of perhaps 20-25 visible members, and the captain maneuvered the boat very close for many photo ops.  The second pod was about the same size- 20 or so individuals visible-- and at that juncture one more boat was on site.  We also saw a few eagles, egrets, and other birds, but the hippos were the main attraction and did not disappoint.  Yes, it's touristy, but we were fortunate to have the water to ourselves most of the time, and the close up views of hippos are unattainable elsewhere.

Our second day included a drive to the beach and sand dunes, as well as a beach horseback ride.   The beach offered lovely panoramic views but the weather was too windy for a dip in the sea.  It's off season for the whale migration.  The parking lots are full of vendors, so beware the idle glance towards their wares or the random charge for parking.  There are a variety of invasive plant species, including goat head stickers, which necessitated shoes until the sand areas are reached.  Walk barefoot at your own risk!

The last day was a drive through the park towards Cape Vidal to enjoy the scenery and wildlife.  The scenery was lovely, and the ecosystem tiers were obvious.   We did see wildlife, including lots of monkeys, some warthogs, cape bison, kudu, zebra and impala. Binoculars aided tremendously. Overall, though, the wildlife sightings were sparse for such a large park that has reintroduced large fauna more than a decade ago.  I would expect a more teeming ecosystem, given the circumstances and the protections that such a large park would provide.

I visited the Sodwana area, that is linked to the iSimangaliso Wetland Park, for the first time this past December as a diving vacation.

Although the diving was great I have to admit that the experience was tainted by reports of racism and hard-handed treatment of guests to the park by park official - specifically on New Year's day. There are apparently some video evidence of the teargassing of a family trying to leave the park on the 1st of January and I hope that the owner will also publish that.

The mess that greeted us on the 2nd of January, when we wanted to dive again, was also not becoming of a World Heritage site. Despite a "No Alcohol" rule on the beach, the road to the park, as well as the beach was littered with empty bottles and other rubbish. This only finally cleared after about 2 days.

This is such a sad state of affairs, since the area is really great and the reef is great for diving! Hopefully enough people will make their voices heard to force some kind of action on this.

The St. Lucia estuary is one of the unique biosystems on this planet, with the subtle interplay between marine and terrestrial aquatic life. This is the only place where I've seen sharks swimming in the lagoon next to hippopotamuses, and crocodiles swimming in the sea!

There are many beautiful woodland paths to explore and the warm Indian Ocean is great for swimming. This is also the only place where I've seen a barracuda jumping over the surf, from the shore! There is an abundance of fauna and flora to admire in the protected areas as well.

The cheapest way to stay is on one of the camping grounds, although there is luxury accommodation as well. Public transport is poor so it is recommended that you make your own arrangements to get around.

iSimangaliso-St Lucia has been targeted as carbon dioxide storage dump (31.01.14)

Holocene: See "Formation of Lake St Lucia" on page 3 of the linked pdf.