The Urnes Stave Church (ca 1050) is the oldest of its kind in Norway.

Between the 11th and 14th century about 1200 Stav-churches arose in Scandinavia. The Vikings were being christianized at that time, but also held on to their own beliefs. In this their ships played a central role, and so they constructed their churches as if they were ships.

Only 30 of these extraordinary shaped churches remain. According to the WHC, "The church brings together traces of Celtic art, Viking traditions and Romanesque spatial structures."

The worldheritage sites I like best are those that require some effort to get to. That's also the case with Urnes: a flight, a local bus, a hired car and a small ferry (and 4 hours) took me there. The Urnes church lies high on the slopes. Because of its relatively small size it cannot be seen from below. After a steep climb you are rewarded by this sight that is both very familiar (I've seen lots of pictures) and striking (its almost perfect shape). Visitors to the site (and they are relatively numerous in summer) can go inside the church with a guide. Explanation is given about its history. That it has been rebuilt several times but that there are some original elements left. And that it is still used as a church, once a month during the summer months. 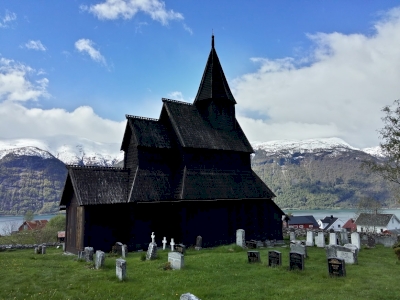 On the eastern shores of the Lusterfjord in Western Norway lies Urnes Stave Church. It's a wooden church and there are plenty of those inscribed on the list. But stave churches in general and Urnes in particular are distinctly Norwegian and clearly a world apart from the many flavors of wooden churches you find in e.g. Eastern Europe.

Urnes itself isn't a large church. It's a small church that can host maybe 20 (?) people, mostly the family of the local noble as it was a private church belong to the noble's estate. I would assume the local population could join occasionally. But that wouldn't have swelled the ranks significantly. The area was never densely settled (and it isn't to this day). The rough climate and terrain greatly limited the space available for agriculture and with it the population the region could support. Side note: There is a reason the Viking went for raids so much.

Urnes claim to fame is that it's the oldest original surviving stave church in Norway. And that it features original Viking wood carvings combining Viking and Christian mythology.

In addition, its location is stunning. The fjord, the mountains, ... It feels as if the whole landscape was composed to create a truly unique site.

Norway has more stave churches on offer. Near Oslo there is one shown in the folk museum. Probably, the most internationally known one is Heddal, which I visited with Randi and Svein. You pass it when you are heading to Rjukan. Heddal is well worth a visit and should be added to the list. Preferably, though, not as an extension, though, as Urnes is a true gem that should not be diluted serializing it and that is well worth the effort of getting to it.

I flew into Bergen. From Bergen I took a fast and very scenic ferry ride to Sogndal up the fjord. After waiting several hours at the Sogndal bus station for my connection, I got a late bus to Solvorn where I stayed at a hostel (Eplet Hostel). Note: You have to tell the driver that you want to get off at Solvorn. Otherwise, they will just drive past it. Solvorn is a 2km detour for them.

The following morning, I rented a bike at my hostel and took the ferry across the Lustra Fjord to Urnes to visit the stave church. The key for the church is with a neighbor. You may want to check the ferry schedules. It seems they operate the whole year, but I think Martina and Ivan had a different experience in winter times (ice?). Going around the fjord will only be possible by car and take quite some time. If you arrive outside season, you may want to arrange the key before hand.

I combined my visit to the church with a scenic bike ride along the fjord.  When I returned to the Solvorn, I was plenty hungry. So hungry indeed, that I was willing to pay Norwegian prices for a restaurant dinner. Alas, it was pre season (mid May?!) and the already very limited restaurant options (2?) in Solvorn were essentially cut down to zero. Eventually, I bought pasta and tomato sauce at my hostel and had a very simple dinner.

The next morning, the owners of the hostel transported me and several other guests back to Sogndal bus station. From there I connected to Flam by bus (includes a ferry trip and a drive through the world's longest road tunnel). Flam is a) the starting point for a boat trip of the Naeroyfjord (WHS) and b) has a scenic railway line up the mountains which connects you back to Oslo and Bergen.

The Naerojfjord is not to be missed. Unfortunately, it was raining incessantly when I visited. In addition, tiny Flam is a popular stop for large cruise ships. A big cruise ship had arrived just before me and the town was swamped, so the trip wasn't quite as idyllic as could have been.

Generally, the fjords in the area are just stunning and I really enjoyed my time cycling along the shores or on board of the ferries.

My husband and our daughter drove to Urnes to see the Stove Church. We spent the night across the fjord from Urnes at a hotel in Wallaker. Took the ferry ride across and visited the great sight of the church. We had a reason to want to see it as our last name is Urness. The cemetery around the church had many headstones with the name Urnes on them. The name got changed from Urnes to Urness when the grandparents came to the US. It was well worth the trip. We wanted to find out more about our heritage but couldn't find anyone to talk to.

I visited Urnes in November 1983 primarily to see the iconic carvings i'd studied in an old Larousse art history book. I had no idea of the difficulty in getting there from Oslo but guessed at the nearest train stop on the Bergen rail line and hitchhiked to a town in the right direction. In Solvorn by lunchtime the next day I found myself on the last ferry across to Urnes. The wonders of the exterior almost made a night in a boatshed along the edge of the fjord worthwhile. Although the church had been closed to tourists when i was there, a death in the village (and a lift back to town with the local builder who turned out to be a contracted gravedigger) allowed me to gain access the next morning. Highly recommended. I doubt it would be so beautiful if it were not so isolated.

After a long and hot summer trip to Greece I decided to wind down for a couple of days in my beautiful neighboring country Norway. I had already visited most of the World Heritage Sites in Scandinavia but not yet the Stave Church of Urnes, a fact that had annoyed me for some time. So it was now high time to “tick it off” as my 146th site. Once in Oslo I embarked on the Bergen-train and traveled up the mountains to Myrdal where I hopped off in order to take the world-famous Flåm-banan down to the fjords and here catch a connecting bus to Sogndal.

Flåm-banen is a major tourist attraction in itself and as the train slowly makes its 860 meters way down to the fjords, through tunnels and mountainsides, you can enjoy a wonderful view including mountains, waterfalls and small villages. In Flåm you can catch ferries to Bergen and other destinations along the Norwegian coast.

My bus trip from Flåm to Sogndal took about 2 hours and on it’s way it passed through the 24,5 km long Laerdal-tunnel, the longest tunnel in the world. At the time I was ignorant enough not to be aware of it’s existence and certainly not of it’s length so after some 15 minutes of traveling through the tunnel I was beginning to wonder whether this was a surreal dream where I was captured in the mountain!??? Despite my worst worries the bus did get out and arrived in Sogndal and Sognefjorden shortly after.

The landscape in Sognefjorden - Norway’s longest fjord - is really Norwegian landscape at its best. It is here were the high mountains slopes rushes straight down into the fjords and narrow roads are winding its way up and down the mountainsides. The area is not very densely populated so its the perfect place to find a nice and quiet corner of Europe and enjoy the solitude or wander in the mountains.

The most comfortable way to get to the Urnes Stave Church is by car. For myself, traveling by public transport only, it had to be an expensive taxi ride from Sogndal to Solvorn were a small ferry boat took me across the fjord to Urnes, a small village with only 200 inhabitants that seem to specialize in raspberry cultivation (try some, it’s delicious). From the ferry you have walk for a kilometer up a steep small road that ends right by the Stave Church, a B&B and a museum.

The wooden church itself is very small and smell of tar. Inside it is dark and not room for more than 30 or 40 people. The interior is a mix of cultural influences where the oldest bits are medieval runic inscriptions thought to go back as far as to to the Viking age as well as 16th, 17th-century pulpit, altar and sacristy. The view from the church and the cemetery overlooking the fjord is absolutely astonishing and if you have the time I strongly recommend you to stay at the B&B in Urnes for a couple of days.

I saw pictures of this church at Disneyworld's Epcot Center Stave Church model in the Norway Section of the park. It almost brought tears to my eyes. Truly one of the world's most remarkable pieces of architecture, in no small part because of its age and for what it represents in terms of the Chistianizing of a barbaric culture. Truly fascinating.

Article on Urnes Church (in Norwegian)

Norway’s Historic Stave Churches Are Even Older Than Previously Thought (04.11.19)