This involves a nice bustrip (costing 0,15 euro) to the outskirts of Beijing passing its university. The 'new' Summer Palace is awesome. It's a group of buildings scattered on a hill and along the lakeside. I just couldn't stop taking pictures of the Temple of Wisdom. I think I've fallen in love with yellow and green tiles here in Beijing. And this temple has them all over, together with innumerable little Buddha statues (the ones closest to the ground missing their heads). When I finally wanted a break after gazing at all the temples, pagodas, halls and so on, I stopped for lunch at the Palace's restaurant. After almost one week in Beijing I encountered them here for the first time: can't-be-bothered waitresses huddled together in a corner, hissing mei you when you order something not too spectacular. Enjoy the old-communist ways at the Tingliguan restaurant, with its yellow chairs, plastic table clothes, darkened windows (no lights switched on). It was fun to see all western tourists peeking around the door, and immediately back off, while I enjoyed my shredded pork with green peppers. 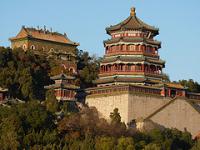 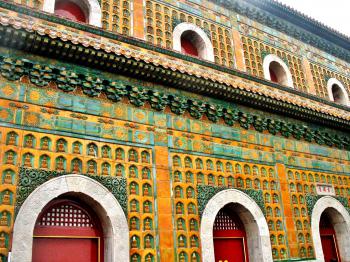 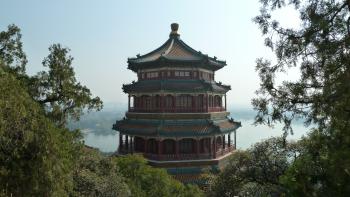 Tibetan relics from Norbulingka on exhibition in Beijing's Summer Palace (23.09.15)

Location for a classic movie: The Last Emperor (1987)
Located in a Capital City: Beijing (Capital of China)
Opera: Nixon in China by J Adams. Act II Scene I. Visited by Pat Nixon. Sings aria in the Gate of Longevity and Goodwill
History of the World in 100 objects: Prog 39 "Admonitions of the Instructress to the Court Ladies". (link) The British Museum web site talks of the painting's "arrival at the British Museum in 1903" and that it had been "in the imperial collection during the reign of the Qianlong emperor (1736-96)." China believes that the painting was looted from the Summer Palace in 1900 (link)