In advance we had a lot of fun with the inclusion of Srebarna on the itinerary of our 2018 WH meetup. At that time it was the worst rated WHS on our website. Would we be able to collectively raise the score after our visit? Srebarna is a freshwater lake that is an important breeding, transit and wintering place for waterfowl. The lake was originally connected to the nearby Danube - now the two are only connected via a channel. The protected area measures only 6 square kilometers. 75% of it is covered with reeds and other marsh plants. During the preparations, I had tried to arrange a serious birding guide to show us around - but the few English speaking ones I was able to track down were guiding elsewhere (even up to Sofia, perhaps a telling sign). Fortunately we had with us Peter, a fellow world heritage traveller who is also a keen birder. He even had prepared a presentation for us. Through this we became acquainted with the 4 most special birds of this area, that lies on the migratory route along the Black Sea: the Dalmatian pelican, the pygmy cormorant, the glossy ibis and the spoonbill.

From the visitor center we first walked down towards the lake. At least, 'in the direction of': around the lake there is a dirt road that you can also drive by car. The trees and shrubs that separate the road from the shore have grown so high that the lake isn’t visible. At a few spots they have made a lookout point, but even there you are still so far away from the lake that you have to have very good binoculars to observe something on the water. Needless to say – we did not see any birds. We carried on following the main road to lookout number 3 - quite an excercise in the hot sun. From there, having seen nothing again, we turned back through the bushes via what once seems to have been a trail. Tree branches regularly block the passage and the grass has grown high. The picnic benches along the route are gradually becoming overgrown with plants.

It got better when we followed an arrow with something like 'eco-nature trail' painted on it. This brought us to a higher area, from where there is a good overview of the lake. Here you should be able to see the colonies of Dalmatian pelicans. However, we mainly saw swans and ducks (of the kind that you see every day in the Netherlands). Fortunately, at the end we still discovered a highlight on a reed island: a cormorant, which according to our birdwatcher could only be a pygmy cormorant. A 'special' species ticked off after all! A day later, part of our group visited the Danube Delta about 230 km across the border in Romania (I was already there in 2010). Videos of dozens of Dalmatian pelicans taking off from the river flooded our whatsapp group. Without any effort they saw all the species that should also be in Srebarna. The Romanian site was listed 8 years after Srebarna, but shows a so much better example of wetland ecosystems in this part of the world that having allowed Srebarna to become world heritage should actually be considered a mistake. 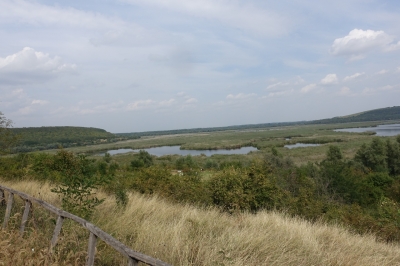 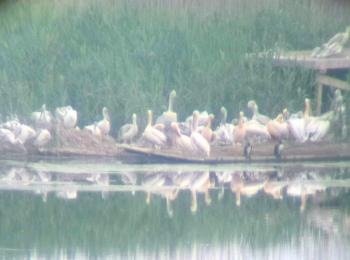 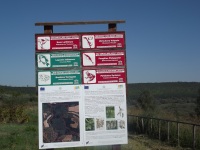