The Historic Centre of Siena has been well preserved since the 12th and 13rd century. Its urban fabric, size and artistic identity distinguish Siena from other medieval urban centres in Italy.

The city had gained independence in 1189. The period that followed was to be crucial in shaping the Siena we know today. It was during the early 1200s that the majority of the construction of the Siena Cathedral (Duomo) was completed. It was also during this period that the Piazza del Campo, now regarded as one of the most beautiful civic spaces in Europe, grew in importance as the centre of secular life. New streets were constructed leading to it and it served as the site of the market, and the location of various sporting events.

With over 50,000 inhabitants, Siena is quite a bit larger than the other medieval towns in Tuscany. Although it also has been preserved well, I found it a lot harder to like (even tacky in some parts). I had to walk for about 20 minutes from one of the parking lots that surround the city center and are aimed at handling loads of tourists (and their buses) in the summer time. Parking at the Stadium is much closer, though not free. 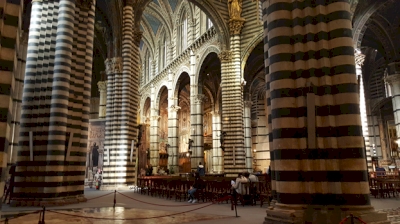 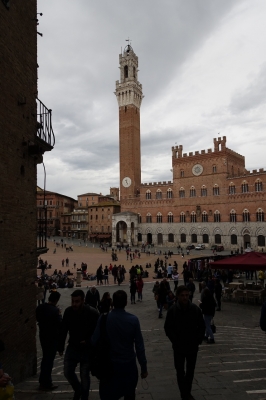 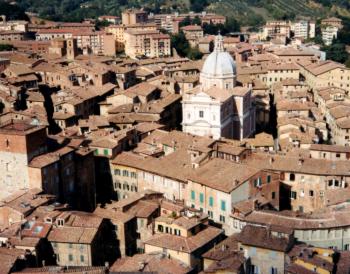 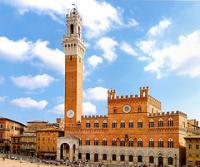 It has been awhile since I visited charming Siena but there

my scrapbook to jog my memory. The town, is marvelous and

the Duomo is fantastic with it's stunning mosaic floors. It's always so incredible to view Europe's amazing archi-

tecture. The highlight of our visit to Siena was having

lunch at Antica Osteria "Da Divo". It is on Via Fanciosa

close to the Piazza del Campo. The atmosphere with Etruscan

vaults and nooks and crannies is terrific, and the food was

the best we experienced on the entire trip to Italy, and that is saying something!! We ate our way through every city. The marketplace was fun and we enjoyed exploring

there filled with delightful little shops and businesses.

I can see why it is described as the heart of Tuscany.

The site has 40 connections

Cathedrals: Cat di S Maria Assunta
Legends and Folk Myths: According to legend, Siena was founded by Senius, son of Remus, who was in turn the brother of Romulus, after whom Rome was named. Statues and other artwork depicting a she-wolf suckling the young twins Romulus and Remus can be seen all over the city of Siena.
Jewish religion and culture: Synagogue (1786) in the via delle Scotte

Located in a Former Capital: Republic of Siena, 1115-1555
James Bond in Movies: Quantum of Solace (2008)
Replica in Mini-Europe
Location for a classic documentary: Palio (2015)