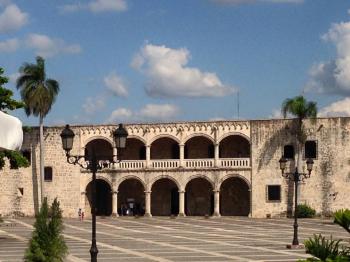 Santo Domingo's place in history is assured by being the oldest European town in the New World, founded in 1498 by Bartolomeo Colón, brother of Christopher Columbus. It was built according to the classic Spanish town plan (a central Plaza de Armas and streets crossing in right angles) that became a model for almost all cities in Latin America, and is home to the oldest cathedral, castle, monastery, fortress, university (and many other firsts) in the New World. Its position as the capital for all the Spanish domains did not last very long, as Havana was soon found to have a more favorable position, but the city did manage to preserve the remains from its glory days quite well. The star attraction is the well-preserved Cathedral of Santa Maria la Menor, known as the Catedral Primada de América, the seat of the first Catholic diocese in the New World. It combines the expected Baroque ornamentation with Gothic features quite unusual on that side of the Atlantic. Next to the cathedral is the Parque Colón, a classic Spanish town square with a statue of Columbus, and just steps away is Calle las Damas, the oldest paved street in the New World. The Colonial Zone is not very big, and can easily be explored on foot; other buildings that I found interesting were the Alcázar de Colón (the former governor's mansion built for Christopher's son Diego, first Viceroy of the Indies, today a really well done museum), the Museo de las Cases Reales (the later residence of the colonial administration, also very interesting, but quite similar to the Alcázar), the Fortaleza Ozama (the oldest fortress still standing in the Americas), and the Plaza de España, a wide square where the WH inscription can be found. There are also various other historic buildings scattered throughout the Old Town, including the former residence of Hernán Cortés, conqueror of Peru, today the seat of the French Embassy, and the ruins of San Nicolás de Bari, the oldest hospital in the New World. It is clear that the Dominican Republic has invested quite a bit of money into the Colonial Zone to lure tourists away from the beaches, and for anyone interested in history, this is a great site to visit. 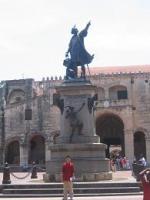 Caribbean Sea
Situated in one of the SIDS: Dominican Rep 1990

Located in a Capital City: Santo Domingo (Capital of the Dominican Republic)
On Banknotes: Puerta del Conde (Colonial Zone); 20 Pesos; 1987
Preservation assisted by Getty Trust: Retablo of Church of Santo Domingo (1997-2000)
Modelled after: Its university was modelled after the one in Alcala de Henares in Spain (nomination file Alcala de Henares)
Built or owned by Spanish: Dating from 1496, when the Spanish settled there, and officially from 5 August 1498, Santo Domingo is the oldest European city in the Americas. Bartholomew Columbus founded the settlement (wiki)