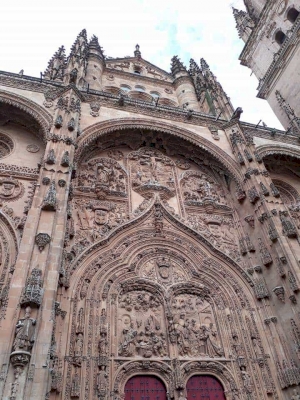 I grew up going to school in an Hijas de Jesus institution in the Philippines. Salamanca was always a place I had wanted to visit, being the place where the congregation was founded, but also because it always sounded like such an interesting and historic city in the stories we were told about it. I could finally attest to that after visiting in May 2018. My family and I visited one afternoon in transit between Madrid and Lisbon. Trains from Madrid depart from the Chamartin Station, passing by Avila and its distinctive walls before arriving in the city of Salamanca. First, we took a taxi to the Hijas de Jesus school just to see what it was like. El Colegio Sagrado Corazon seemed to be closed for the day (was probably a weekend), but it was conveniently right below the hill where the cathedral towered prominently, so we walked up and into the side entrance of the cathedral - which turned out to be the exit (oops!). That turned out to be a blessing in disguise, though, because the cathedral was closing, and if we gone to the actual entrance, we would've wasted time taking pictures of the beautifully messy Churrigueresque facade and possibly missed the closing time. Anyway, the exit first brought us to the somewhat disheveled cloister and the many unique side chapels, then to the Romanesque, clearly older, Old Cathedral. Some interesting medieval frescoes and designs can be found here. Overall, it's a very solemn and historic, yet humble atmosphere in the Old Cathedral. The New Cathedral, which is directly connected to its older counterpart, is anything but humble. It was like a slightly smaller Seville Cathedral, but without the crowds, the gold, and the Columbus. Actually, with the lack of tourists, the empty church and its graceful Gothic vaults felt even bigger.

Right outside is the old city. Salamanca's historic centre was one of my favorites in Spain, along with Cordoba's, because of how well-preserved it is. Unlike Cordoba, though, Salamanca's is very cohesive. It's almost as if the entire city was carved from the same block of sandstone, and it just looks golden, literally. Every building, from the iconic Casa de las Conchas to the many beautiful churches, has that same Salamanca feel to it. I think that in such a diverse country and continent, this cohesiveness in a historic centre is refreshing and just as notable as one known for a fusion of cultures. Of course, the 2 most famous landmarks of the city, the heart and soul, are the Plaza Mayor and the University. The Plaza Mayor is the bustling, beating heart of the city, but unfortunately, I didn't enjoy it so much because there was an event blocking the normally stunning views. But the architecture still shines, and it blends in well with the rest of the city. Although much of the university is probably off limits to the casual sightseer, I enjoyed the external architecture a lot. It's intricate Salamanca design at its finest, I didn't know how else to describe it. Apparently it's Plateresque architecture, but Salamanca truly has its way of making different architectural styles fit right in with the rest of the city. The university is what I consider the soul of the city, because it's what makes Salamanca what it is. It's a university city, through and through. It's the reason the city is so renowned, and it's truly one of the most notable university cities in the world. Among other things, this is what seems to define the Salamanca experience. But whether you're a student or not you're bound to learn something here. There are just so many things to see and do here for a city of its size, but everything has the distinctive Salamanca stamp on it. That's why I loved Salamanca so much, and that's why it's a world-class WHS. 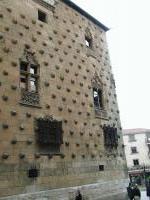 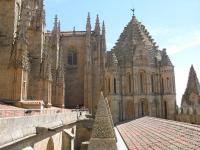