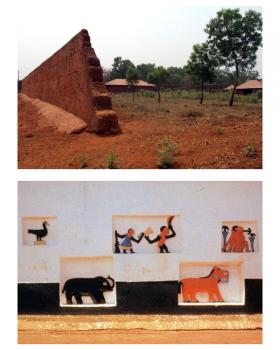 Preservation assisted by Getty Trust: Palace Bas Reliefs (1992-7)
Located in a Former Capital: Abomey - Capital of the Dahomey Kingdom 1625-1892
Role of Women: In the 18th century King Agadja of Abomey created a regiment of female guards. Later they became active warriers and fought the French who likened them to the "Amazons". They are portrayed on some of the palace bas-reliefs
Total Solar Eclipse since Inscription: 29 March, 2006