Qal'at al-Bahrain is the archaeological site of a port which was once the capital of the Dilmun civilization, and served more recently as a Portuguese fort.

It is a typical tell - an artificial mound created by many successive layers of human occupation. The hill shows almost continuous remains from ca. 2300 BC to the 16th century BC. They span the Dilmun, Tylos, later Islamic societies and the Portuguese period. This makes it a rare archeological and historical reference site in Eastern Arabia and the Gulf region.

The site gets its name from Qal`at al-Burtughal (Portuguese fort). In the early 1500s, the Portuguese saw Bahrain as a key point to protect their trade routes between India, Africa and Europe. They invaded the island and set up military base at the Bahrain Fort. They strengthened the already existing fortress and erected new stone towers.

The site was only rediscovered in 1954. Restoration was started in 1987.

Bahrain Fort is located on the outskirts of Manama, with good views over the sea and to the highrise buildings of the Bahraini capital. To my surprise there were dozens of other European tourists around. Most of them Germans, busloads full of them, maybe they were from a cruise ship. They however did only a quick tour of the site, so I had most of it to myself anyway. I started with a circular walk outside of the walls. The edges of the terrain are covered with some pretty palm groves, which have been in use since ancient times. The fort itself looks almost over-restored. Compare my photos for example with the one taken by Paul Tanner in 2005 (see his review below). It seems that it has been white-washed during the final phase of restoration. The fortifications look like they always do (I do like the straight lines of the walls and the shape of the turrets). The interior holds a remarkably large open courtyard. The surrounding structures are in ruins and one can only guess what they were used for. There's a small museum on site, that displays a lot if items (pottery, stamp-seals) that I had already seen earlier in the day in the more extensive National Museum of Bahrain. It was only there that I found out that there is an entrance fee to the Fort - after arriving I had just walked up and around it without being bothered by anyone (the ticket lady hides herself in the museum). The complex has a pretty good museum café too, where I enjoyed a salad on the terrace while overlooking the fortress and the harbour. 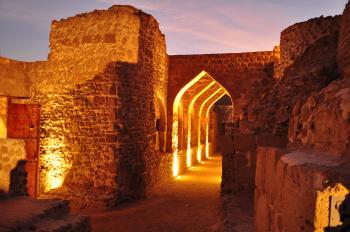 I visited the fort with my parents in the mid 60's. there was an excavation of some kind going on even collected a sliver of wood from some of the beams that were being removed.kept it all these years. we were there in 1965 or 66.

We visited Bahrain in 2012 just about 10 days after the big protests end of November that year. For the full story on the holiday and the gallery of photos please see the blog:

Today we stop at the first UNESCO Site Bahrain has: Qal'at al-Bahrain (Ancient Harbour and Capital of Dilmun). It's also called the Portugese fort or Bahrain Fort (located in Karbabad on the junction of Karbabad Ave. & Qalat Al Bahrain Ave). From around 2400-2300 B.C. this place has been inhabited by humans and served first as the Dilmun capital. The Portugese fort is the last remains of the 16th century.