The Ouadi Qadisha (the Holy Valley) and the Forest of the Cedars of God (Horsh Arz el-Rab) is a cultural landscape encompassing one of the most important early Christian monastic settlements in the world.

The valley has been a place of meditation and refuge since the earliest years of Christianity. Traditional land-use is practiced in the form of dramatic terraces that grow grain, grapes and olives.

The nearby Cedar Forest is seen as a sacred forest. The ca. 375 Cedrus lebani that survive here are the last remaining of a great forest that gave Lebanon its fame in Antiquity. Some of the trees are claimed to be over 3000 years old. Separate inclusion of the Forest of the Cedars on natural criteria was rejected in 1993, because the designated area was deemed to small for conservation. We first drove up in the mountains, already enjoying fine vistas over the Qadisha Valley and the villages around it with their large churches and redroofed houses. I had seen snow on the mountain tops on my way to the Bekaa Valley too, but here you're much higher (about 2,000 m above sea level). There are ski resorts also. No wonder that the 'Forest of the Cedars' was covered in snow about 1 - 1,5 meter high. The 'Forest' is a pitiful patch of a few hundred trees, leaving some of my fellow tourmates wondering why we had travelled for hours to just see that. It is quite a touristy spot however, the road along the forest is packed with souvenir stalls. There were other tour buses full of Lebanese daytrippers also. After half an hour or so, having photographed every single remaining cedar, we went back into the bus to descend into the valley. This is an exciting ride, as we had a big touringcar bus and the road is very narrow and winding. All around there are cliffs, with lots of small caves in it. Some of those were used by hermits and other refugees. We went to a bigger monastic site: the Monastery of St. Anthony of Kozhaya. Most of the constructions here are relatively recent (pretty nonetheless!), but it all originated in cave here too. The main cave can be visited, and it is still used by women praying to become pregnant and (after a succesful pregnancy) coming to give thanks by donating pots and pans. 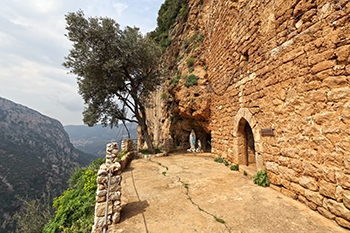 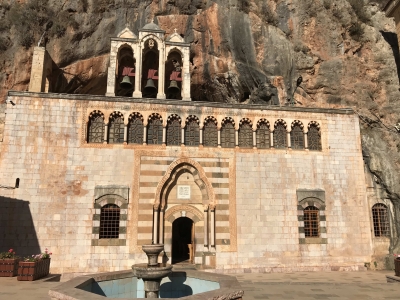