The church was constructed between 1763 and 1765 as a small village church, because the trip to the parish church in Jämsä took too long. Petäjävesi church was built on a peninsula, where two lakes meet: so the congregation would reach it by boat (or over the ice in the winter). The bell tower was added in 1821.

The church was abandoned in 1879 for a new church. In the 1920s the Austrian art historian Josef Strzygowski noticed the architectural and historical value of the church and since 1929 it has been restored several times.

Our luck with Finnish summer weather ran out the day we planned to visit the wooden church in Petajavesi. It was pouring when we got into our rental car, and we almost decided to skip the 1.5 hour drive north from Tampere. But you have to show stamina when collecting WHS, so off we went! We arrived at 10 on Sunday morning and received a friendly welcome. A ceremony in front of about 20 locals had just started. A solemn protestant service it was. That gave us time to glance at the sturdy woorden interior design of this church. We didn't stay too long however, and quickly headed to the other side of the street for a warm cappucino in the gas station annex bar/restaurant. The site has become a popular tourist attraction for sure. I arrived at the opening hour of 10 a.m., and I had to share space already with a bus load full of American students and some other individual travellers. There's an entrance fee charged of 5 EUR. 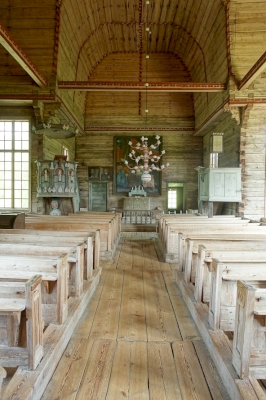 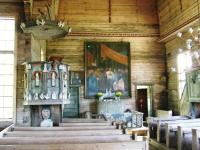