Paphos is an archeological site from Antiquity.

It has been inhabited since the Neolithic Age. In ancient times it was known for its Aphrodite-cult: the Myceneans - the rulers of Cyprus at the time - erected temples for this fertility goddess.

Modern Paphos is a beach resort as there are so many in the Mediterranean. It's an unlikely place to find treasures of the past, treasures that are carefully being unearthened. The most spectacular findings are the Tombs of the Kings, graves that are set up like houses. There's a strong Egyptian connection here, and also the comparison with Petra (Jordania) has been made. Only a few hundred meters from there, the most beautiful mosaics I have ever seen have been discovered. We're not talking about a few colored stones here and there, but about the floors of whole rooms and even of one total house. An amazing sight. 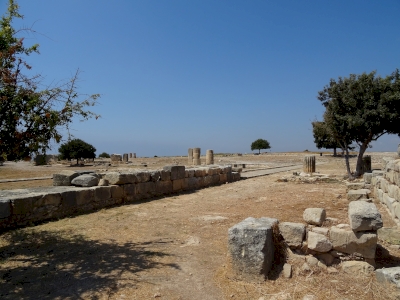 It was mid-day and the sun was intense. Not so much the heat, but the intensity of it, beating down like a physical weight. Entirely the wrong time to be walking around an exposed archaeological site. I sought respite in the shade of a tree. Around my head budding pomegranates dangled. They reminded me of the myth of the abducted Persephone, tricked into eating pomegranate seeds by her abductor, Hades, and condemned to spend half the year as his consort in the underworld. It was an apt thought. For gazing around the hard-baked earth of Palaepafos it was clear that the glories of the sanctuary of the goddess Aphrodite too had withered and vanished underground.

More than any other World Heritage Site Paphos has served as a sort of leitmotif to my adult life. I first visited in 1999 while revising for my university finals, sneaking in with my dad through a gap in the fence at the rear of the Nea Pafos archaeological site near the lighthouse (sorry!). In 2008, after discovering the fascinating world of Unesco World Heritage Sites, I re-visited, spending a day exploring not just the archaeological park but also the wider Kato Pafos area and the Tombs of the Kings. I returned to the archaeological park for a third time in 2011, this time with the woman who is now my wife. And now, in 2019, I was back again, accompanied not only by my wife but also my own son. Three generations over twenty years. A blink of the eye to a site as ancient as Paphos.

There are four parts to the Paphos World Heritage Site, covering a significant timespan in a way that isn’t always harmonious.

If you have time for just one of these segments, visit the Archaeological Park. It is convenient to reach and the mosaics truly are beautiful. Visit in spring, if possible, when colourful wildflowers carpet the site. If you have a bit more time – and your own transport – Palaepafos is interesting, more for its museum than for what remains in situ. If you don’t have your own transport visit the Tombs of the Kings instead. The other sites of Kato Pafos are a hodge-podge of different eras and purposes and added little or anything to my understanding or appreciation of the Paphos World Heritage Site.

Please note that the Cyprus Department of Antiquities offers a one-day special entry card for €8.50. The individual entrance fees for the Archaeological Park, Tombs of the Kings and Palaepafos add up to €11.50 (€4.50+€2.50+€4.50). So if you are going to visit all the components (or even just the Archaeological Park plus Palaepafos) in a single day, the special entry card gives you a saving. Even more so if you try to visit Choirokoitia on the same day. 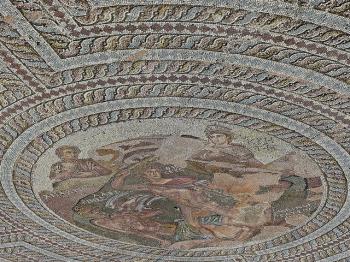 I visited this WHS in February 2016. Although the main site (2 archeaological sites) is close to the Paphos Castle, the other inscribed site, known as the tomb of the kings, is quite a distance away and close to one of the best hotels in Cyprus for afternoon tea. However, this was once a huge uninterrupted landscape and in fact the sheer size of the site together with the good condition of some mosaics and remains make it quite a worthy site in terms of OUV. There are better examples on the list, however it is a very interesting site to visit in Cyprus and the most visited tourist attraction on the island. The marble Unesco plaque is close to the amphitheatre/lighthouse and close to the entrance there was a very interesting exhibition on the avifauna depicted on the mosaic floors which I really enjoyed. Being mainly an outdoor site close to the sea, there are several live bird species you can spot and some of them you can also spot on the mosaic floors. The main mosaics can be visited on an indoor wooden platform at the House of Aion (my favourite being the Triclinium mosaic) and at the House of Dionysus (which houses the largest collection of complete mosaics; my favourite was the rather discoloured one forming the old thermal baths with a stone pluck in the middle). The House of Theseus still does not have an enclosure so its mosaic floors can still be enjoyed with direct sunlight on them (although this won't be for much longer as an enclosure is to be built soon). Here my favourite mosaic is that of the mythical duel between Theseus and the minotaur in the labyrinth of Crete (picture). Moreover, the archaeological park has several geometric mosaic floors, thermal bath remains, irrigation remains, columns, the remains of the Saranda Kolones castle, etc. and most remains are still numbered or are still being excavated. On the other hand, the tomb of the kings is just a minor site nowadays with the main highlight being the underground tomb carved out of solid rock which at times imitated the houses of the living. The name though is quite misleading as no king was ever buried here. Overall, this site is a very relaxing and rewarding afternoon trip to visit when in Cyprus. 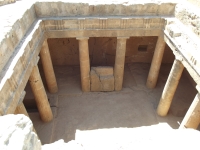 Another part of this WHS is the Sanctuary of Aphrodite near Kouklia village, just off the highway between Paphos and Limassol. This contains ruins of an ancient temple complex.

Paphos is a very touristy city on the Western coast of Greek Cyprus. It features abundant huge restaurants and English pubs which makes it lack any integrity it might have had. The findings for which Paphos got its nomination are of varying significane and quality. Of utmost beauty are its wonderfully preserved mosaics which are the most beautiful ones I've ever seen. They are of such artistic quality that they can be appreciated as art and not only for their historic importance. The other findings in the archaeological park and the nearby port and castle are much less interesting. Another well-known attraction is the Tombs of the Kings (not far to reach by foot). These catacombs are easily accessible and beautifully located along the shore. The old basilica is also worth a visit. What I found less appealing were the caves and Agia Solomoni catacomb which are surprisingly neglected and not that welcoming. The upper town (Ktima) is nice for a short stroll but nothing more.

I recently had the experience of viewing the mosaics at Paphos in the snow! I had the benefit of seeing the true colours and found it incredible that they were laid 2,000 years ago. The whole scale of the site was amazing and well worth a future visit. Having the amphitheatre to myself, as everyone else had been put off by the weather, truely was an inspiring experience!

Cave Temples or Churches: Agia Solomoni
Gothic: “The Gothic hall in the east wing [of the Lusignan manor house] is considered to be one of the finest surviving monuments of Frankish profane architecture on the island.”

Mosaic art
Prayer Labyrinth: Roman Mosaics in Villa of Theseus and Villa of Dionysos
Protective Shelters: Mosaics
Necropolises: Tombs of the Kings
Tunnels: 5 tunnels in Palaipaphos
Catacombs: Agia Solomoni
Pillars: St Paul's Pillar
Theatres: Odeon Theatre
Lighthouses: This is a disused lighthouse which stands above a Roman amphitheater in Paphos. It is situated afew hundred meters from the sea.
Asklepieion: Paphos Archaeological Park contains an Asklepieion in the west wing of the Agora

Assyrian Empire
Ottoman Empire: The Lusignan manor house that now serves as the Palaipahos Museum, served as the centre of administration for the local Ottoman chiflik and aspects of the building date from this era.
Helladic Greece: Palai Paphos
Sieges and Battles: Palaepaphos was besieged by the Persians during the Ionian Revolt and there is some debate about whether some of the archaeological remains are those of a siege mound or of an acropolis.

Sea Ports
Ongoing Archaeological digs: University of Sydney (Paphos theatre site) reports up to 2010 and plans for 2011
Sugar: . Following the prohibition of religions other than Christianity the Palaepaphos site became a sugar cane plantation. The Lusignan manor house was centre of operations. (There is a Lusignan sugar-cane refinery in the coastal plain but although it seems to be part of the Palaipaphos archaeological site to the Department of Antiquities it appears not to be within the inscribed area.)

Goddesses: Aphrodite: Aphrodite's Sanctuary & Aphrodite's Sacred City are part of the WHS
Mentioned in the Bible: Acts 13 6 - Visited by Paul who was lashed for preaching Christianity
Christian Pilgrimage Sites: Agia Solomoni, with sacred tree
Jewish religion and culture: Agia Solomoni catacomb church is believed to have been once the synagogue of the Roman Paphos.
St Paul was here: St Paul's Pillar - "Saint Paul visited Pafos in 45 AD in an attempt to convert the ruler of the time to Christianity. He was successful in his efforts, but not before being tied and whipped to this otherwise unremarkable lump of stone. The Pillar of Saint Paul is one of several popular stops for pilgrims who come to see the religious sites of this early bastion of the Christian faith. He received 40 lashes for evangelising on the island." (visitpafos.org)
Greek Orthodox churches outside Greece: The Palaipahos site at Kouklia incorporates the Church of Panagia Katholiki

Built in the 2nd Millennium BC: The sanctuary of Aphrodite in Palaipaphos dates to the 12th century BC.