In the Ancient City of Nessebar, several successive civilizations have left their mark over a period of 3000 years. It started with the local Thracians, followed by the Greeks, the Romans and their eastern successors the Byzantines who made it into a Christian spiritual center in the Middle Ages. Not much of substance has been written in reviews so far about this little Bulgarian town, which is threatened by its proximity to the resort of Sunny Beach (the name says it all…) and overrun by day trippers of the worst kind especially in summer. Nessebar’s attraction nowadays lies mostly with its Byzantine churches - there is virtually nothing left of the other periods of his existence. It reminded me a bit of Ohrid in Macedonia, a small town with Byzantine churches dotted here and there amidst souvenir shops and restaurants. None of the old churches in Nessebar are in religious use anymore however (they are either ‘museums’ or ruins), while there is still some (albeit limited) religious feel to Ohrid.

You can buy different combination tickets to visit the various museums and churches in the town. I took one of 18 Lev (9 EUR), with which you can enter the archaeological museum, the St. Stephen Church and 3 other churches of your own choice. I started my tour at the archaeological museum, which lies right after the city wall when you enter the peninsula. There was hardly anyone there. They display here mainly relics from the Greek and Roman periods of the city - Nessebar was a colony of both. It’s an interesting enough start, but I found no memorable objects amidst the collection. On my last morning I walked a full lap of the peninsula along the waterfront. Even if you walk slowly, this takes less than an hour. On the south side lies another of the most beautiful churches - the Church of Saint John Aliturgetos. This was heavily damaged by an earthquake, but is now being restored with money from the US Ambassadors Fund. The brick patterns are especially beautiful here. Click here to see more of my photos of Nessebar 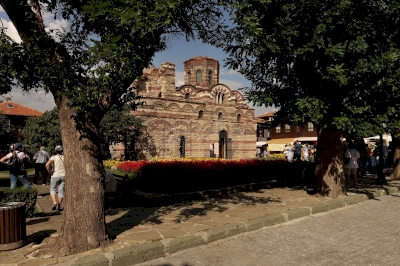 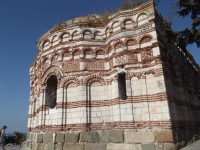 Byzantine Empire and Civilization
Ancient Greek colonies
The Crusades: Conquered in 1366
Thracians: Originally a Thracian settlement known as Menebria founded in the 2nd millennium BC