Mérida was founded in 25 BC with the name of Emerita Augusta. The city became the capital of Lusitania province, and one of the most important cities in the Roman empire.

Mérida preserves more important ancient Roman monuments than any other city in Spain. They include:

Some later monuments (like the Moorish Alcazabar and two early Christian churches) are also part of the as world heritage site designated area.

Already at Mérida's admission in 1993 there were 20 other (Mediterranean) Roman heritages inscribed on the List. And many more followed, currently I count 28 of them and even last year one was added (Serbia's Gamzigrad-Romuliana). "Ancient Rome" is one of the most common site categories. One just wonders how many is enough? My personal favourites so far have been Rome, Pompeii and the Villa Romana del Casale. Before my trip to Extremadura I wondered what Mérida has to offer that all the others don't. Modern Mérida feels a bit dilapidated at first sight: graffiti, poor housing. I started my tour of the Roman monuments at the amphitheatre and the theatre. For 10 Euros you get an entry ticket to these and the other important sites in town, which can be used over several days. Good value I think. The prize piece is the ancient Roman theatre, which could seat 6000 people and still has the formidable stage with marble columns and statues (although these are replicas).

Close to the theatres is the Roman Museum, which is very much worth visiting. This is were my initial concern faded away. The accomplishments of the Ancient Romans continue to amaze. Remember that the Civilization of Ancient Rome existed really early in history - more than 1000 years before Angkor Wat or Machu Picchu were constructed - and that so much is left, both physical and in writing. There's a well presented exhibition here about the local Roman road system, the Via de la Plata. Entry to this great museum is only 2.40 Euros (and free to minors, seniors and the unemployed!). 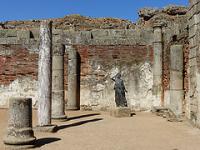 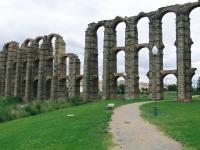 I visited Merida in 2003 and thoroughly enjoyed it. Make sure you arrive early to the ruins as it can get very hot and crowded. The museum must not be missed. It is a work of art in itself with many exhibits. I would love to go there again.