Le Morne Cultural Landscape encompasses a natural fortress that was used as a retreat for escaping slaves in the 18th and early 19th century.

The slaves on Mauritius came from throughout the Indian Ocean: Madagascar, Tanzania, Mozambique, India. They worked in the sugar industry.

Le Morne is easy to see but hard to visit. I had my first look at it from the plane arriving from Paris. At the descent, this remarkably shaped mountain at the tip of Mauritius was very clearly visible. Its inaccessibility of course is part of its history. The steep cliffs deterred many. Mauritius even stated at the nomination of this site for WHS that the absence of cultural evidence is the ultimate proof of maroon life, as they had to be as invisible as possible. That's a daring statement for a 2034 page long nomination file! Few traces remain: six rock shelters used by maroons have been discovered on the summit, a network of trails used by the former slaves is also still there. Fishing for your own meal is a common pastime too in the modern Le Morne village, like it was during slavery. But there's nothing specific to see for the casual visitor. I started out on foot from Le Morne, and walked on the beach onto the thin isthmus that separates Le Morne from the Mauritian mainland. At that spot there's a sign that you enter the WHS area. Le Morne Village nowadays is a sleepy town, where people surf and fish. Like other villages in the area it is mostly inhabited by Creoles, and as such has a less Indian feel than the rest of the island. The taxi driver that had taken me there made the best out of our visit and bought two large squids and another big fish, fresh from the sea. 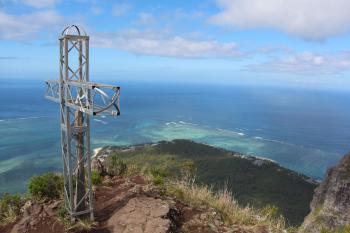