After the decline of the Axumite state, a new Christian dynasty emerged in the 12th century. This Zagwe dynasty made its capital in Roha, some hundreds of kilometres south of Axum.

According to a legendary account, King Lalibela was born in Roha. His name means 'the bee recognises its sovereignty'. God ordered him to build 10 monolithic churches, and gave him detailed instructions as to their construction and even their colours. When his brother Harbay abdicated, time had come for Lalibela to fulfil this command. Construction work began and is said to have been carried out with remarkable speed, which is scarcely surprising, for, according to legend, angels joined the labourers by day and in the night did double the amount of work which the men had done during the hours of daylight. With a knowledgeable guide I visited the 11 rock-hewn churches. Only when you go down the size and the outside carvings of the churches become clear. The fact that the places are still religiously important, also adds a lot of atmosphere: pilgrims, priests and other clergy are abundant. 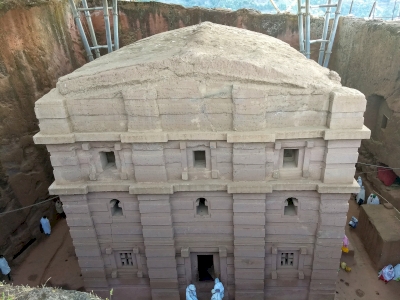 A group of French researchers is given the go-ahead for the first comprehensive study of Lalibela (01.06.09)

The European Commission has just started a multi-million euro project to erect four shelters to cover five of the worst-affected churches. Those that will be covered are Biet Medhane-Alem, Biet Maryam, Biet Masqal, Biet Amanuel and Biet Abba-Libanos. Fears for Ethiopia's crumbling churches (24.02.07)