Kulangsu: A historic international settlement covers an island where interchange of Chinese, South East Asian and European architectural and cultural values occurred since the opening of a commercial port at Xiamen in 1843.

Foreign missionairies, diplomats and workers lived on Kulangsu while working in the larger city Xiamen across the strait. They were instrumental in introducing modern western culture and technology to China. The historic urban settlement consists of 931 structures (residences, schools, hospitals, gardens). The fusion of cultures resulted in a new architectural style: the Amoy Deco Style, which originated on Kulangsu and this is where the best representations of it can be found such as the Hongning Hospital and the Yanping Complex.

Kulangsu: a historic international settlement comprises an island off the coast of Xiamen which was inhabited by foreign traders, missionaries and diplomats in the 19th and early 20th centuries. Later in the 20th century it also became home to Chinese who returned from abroad. Together they gave a modern impulse to China through the input of Western culture and technology. The circa 1000 preserved historic buildings show a mix of European, Chinese and South Asian architectural styles. The island lies really just right off the coast, you can almost swim towards it. The ferry for the local residents also takes only 5 minutes. Tourists have to leave from a location further away though, with a boat that takes longer (20 minutes). There were at least 200 people on 'my' boat, all Chinese. Kulangsu (Gulangyu in modern Chinese) is a very popular destination for Chinese tour groups: there are no less than 13 million(!!) visitors per year. And that while there even is a daily limit on the number of visitors. In the weekends and around Chinese holidays you have to book the boat in advance, otherwise you run the chance that the tickets for the day in question (with a maximum of 50,000!) have ran out. The unique architectural style that has developed here on the island is called 'Amoy Deco': Amoy for the local name for Xiamen, and Deco to the art movement Art Deco. It produces houses in brick with Chinese-style ornaments. The island also has 3 Christian churches. These served today as a background for the wedding photos of newly married (or to be married) Chinese couples. The island is a nice and relaxing place to walk around in good weather. The buildings however are not that interesting to a European person and I found it disappointing that you can not enter anywhere. To me a visit of three hours was enough. A special mention has to be made about the street food: like in Xiamen on the mainland, the food stalls are a real asset of Gulangyu. You can serve me an oyster omelette any day!

Click here to see more of my photos of Kulangsu 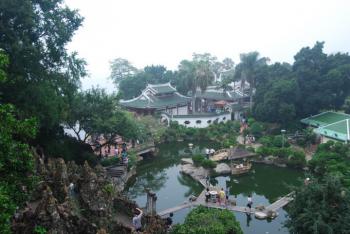 I visited Gulangyu (Kulangsu) in 2010, during a weekend trip to Xiamen (and the Fujian tulou), flying in from Hong Kong, where I was staying for a few months. In a sense, Gulangyu delivers what Hong Kong or Shanghai only promise: the fusion of West and East in a late 19th century / early 20th century international settlement established to trade with China. Gulangyu is surprisingly big and quite well-preserved (though when I visited in 2010, a few of the mansions were in the process of being "spruced up"). Its architecture has a distinctive Western flair to it, but Chinese elements also appear here and there (and it includes at least one fully-fledged Chinese garden). A few parts, such as the giant statue of Koxinga, are of a younger age, and it's a bit strange that they have been inscribed too. As should be expected of most tourist sites in China (in particular those in the middle of a city), it is quite touristy, but (at least in 2010) still bearable. The lack of traffic is definitely a plus - one can just stroll aimlessly around the island to discover its various corners. Overall, it was a very pleasant visit, and a break from the general hubbub of modern Chinese city life.

I visited the island in August 2016. It is a delightful oasis of calm, with no cars permitted. The early C20th colonial architecture is abundant and spread across the island, which is fun to explore. There were few western visitors like myself, but it is a very popular domestic tourism site and ferry numbers are limited. I wish the authorities well in the 2017 World Heritage inscription and hope the impact of tourism will be controlled.

Visited Kulangsu in 2009. This island not far away from modern China City Xiamen (Amoy). The island is full of tourists by the time I visited and I believe the island itself became more and more heated over the years.

Away from the crowds you may find some peaceful beaches, architectures with obvious western influence. In general this is a popular place in China local love to travel.

Fusion: Kulangsu is shown to be unique in that it witnessed mutual reference and a cultural fusion between diverse cultures that materialized in an organic urban fabric, and a slow self-transformation (AB ev)

Built in the 19th Century: introduction of modern western culture and technology since the opening of a commercial port at Xiamen in 1843 (AB ev)

Cultural sites taking up an entire island
One million visitors or more: The State Party indicates that Kulangsu has recently faced a sharp rise in visitor numbers, which increased from 5,748,500 in 2009 to 12,463,000 in 2014. (AB ev)
Visitor Limits: maximum number of visitors per day would amount to 15,000 (into effect on 15 June 2017)
Minor Planet named after them