Konso Cultural Landscape represents a living cultural tradition that has existed for over 400 years in a dry environment.

The Konso people migrated to these highlands, where they constructed terraces to support agricultural fields.

Within the area are also associated sacred forests and shrines. The Konso are noted for their erection of wakas: memorial statues to a dead man.

i have seeen konso land scapes ,it is very amayzing and very exellence place.i understand that konso people is the base to all peoples to conserve water and soil.

Konso is very special place for me! especially for its settings and natural gifts and talents of the residents. As one one of konso people I feel proud of being from land with such type of natural blessings and from a society with such type of talents. i.e tracing, wood curving(waka), conflict resolution techniques. this is just to say a little of what Konso is endowed with.

In konso, there is an area having its unique culture. These area is called "duro-teshmale" which is found to north-west of konso capital city "karat".Around these area,there is their own culture of marriage.these culture is during the time of marriage,the couples fight each other at the first day of the marriage. these fighting is the culture which is must at the first day of the marriage(i.e "FIGHTING" is the thing that could not missed during the time of marriage.).These "fighting" has its own meaning.Its meaning is that when the couples fight each other during their first day of marriage and start sexual-intercourse, the male will be "HUSBAND"and the female will be "WIFE".Othrewise if there is no "fighting" during their first day of marriage,their marriage is meaningless and they will not be called "HUSBAND-WIFE" according to the rule of the culture. 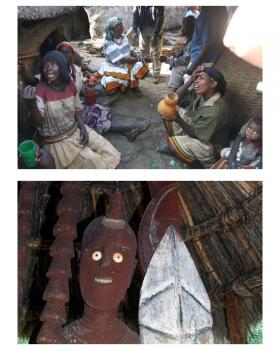 As we visited the Konso area of S Ethiopia in Dec 2007 we will be particularly interested to see what actually emerges within the nomination which is currently foreseen for 2010. The description on Ethiopia’s T List entry of 1997 isn’t that exciting – “Konso-Gardula (paleo-anthropological site)….. discovered in 1991. The sites are dated to be between 200.000 and 2000000 years old…. Early and middle pleistocene animals and hominides fossils along with early Acheulian and Oldowan cultural materials ….. Twelve individual hominides identified to be Homo erectus and Australopithicus Boisei…”. Ethiopia already has 2 paleo-anthropological sites inscribed at Lower Awash and Omo and also had another at Melka Kunture deferred in 1980 (which we also saw). Clearly Ethiopia is important for its central role within the East African “Cradle of Mankind” and can be rightly proud of such remains as have been found within its boundaries – but can it be making too much of a “good thing”?

In fact, subsequent documents seem to suggest that the nominated site will cover rather more than these “paleo anthropological remains”. The first is dated 1999 when UNESCO granted $15000 for “Preparatory Assistance - Konso Cultural Landscape”. The documentation states “The Konso region is known for the recent discovery of 17 paleo-anthropological sites dated from the middle and lower Pleistocene age. It is also a remarkable landscape which contains outstanding geo-morphological features, sacred forests and stone terraces”. By 1999 we have a presentation by Yonas Beyune at a “World Heritage Convention and Cultural Landscapes in Africa Expert meeting – Tiwi Kenya”. It concludes “The UNESCO World Heritage preparatory assistance request …… resulted in "Preliminary Report on Konso" outlining the major aspects of the Konso culture. The Konso archaeological sites and cultural landscape meet the criteria for the inclusion of cultural properties in World Heritage List and could be inscribed as a living cultural landscape with associated values.” The site description in PDF pp 99-104 quickly covers the claimed special nature of the paleo anthropological sites and then moves on at far greater length to the “Konso Landscape and Living culture”. The “Cultural Landscape” has become a common approach to inscribing sites of African indigenous culture and this one contains many of the aspects to be found in others – landscapes formed by traditional agricultural techniques, structures and cult objects/locations (in this case terraces, stone walled villages and carved wooden stelae known as “Waga” placed on graves within sacred groves). All “good stuff” – but one is left wondering whether the paleo-anthropological remains really fit in that well with these aspects other than to show that “man” has been in the area a very long time. There is no other “cultural” link between the 2 elements.

So what will you see if you go to Konso? Well of course we don’t yet know exactly which sites within the area will be inscribed and our visit was also hitting an unseen target! If you are travelling from Addis to Omoland you will pass through/eat at or stay in the ugly crossroads town of “Karat” where you are supposed to get permission (and of course pay) to visit the nearby villages- one of which is walkable but most of which really require a vehicle to reach(If you have come from Arba Minch you will also pass through the village of "Gardula" a few miles before you reach Konso-Karat). The Konso are not perhaps as obviously “colourful” in costume and custom as some of the other ethnic groups you will see later on in Omoland such as Hamer, Mursi and Dasenech. Most of the men have moved across to trousers and T shirts – but the women still wear their voluminous and brightly bordered skirts and "woolly hat" hair-dos(photo). We were there on a day when a large group of US missionaries was being “entertained” (If you want to get a feel for how well organized and widespread the US mission agencies are have a look at the Joshua project ! It is also a very useful resource for anyone interested in matters tribal worldwide.) and saw the male costumes as well. We personally found the village visit resulted in too much hassle from the locals for comfort but the other “tourist visit” to see the compound of the Chief was much more rewarding. He is obviously used to “receiving” tourists and, in his excellent English, allowed us an interesting question and answer session in which we gained some feeling for the culture, lives, problems and aspirations of his people. There was no hassle at all from the locals present as we walked around the compound with its various “houses” and to the sacred grove to see the Waga in place (photo). This all provided useful background to more detailed study on our return. The Konso may not be fully “up there” with some other African tribes who have had their homeland UNESCO-inscribed such as the Dogon and Betamaribe but are certainly worth visiting if you are in the area. But just how many such tribes are there across Africa whose “cultural landscapes” could be put forward? Well – possibly at least as many as all the different European ethnic groups who have managed to get some aspect of their culture inscribed!! Oh, and we never made it to whatever remains at the paleo-anthropological sites.

Megalithism: The tradition of erecting generation marking stones called daga-hela, quarried, transported and erected through a ritual process, makes the Konso one of the last megalithic people. (Description)

Sir Wilfred Thesiger: Thesiger suggested the tribe for an anthropological Phd thesis "While enquiring about the possibilities of fieldwork in Ethiopia, Wilfred Thesiger drew his attention to the Konso, among whom Hallpike lived from 1965-67. His doctoral research was published in 1972 as The Konso of Ethiopia. A study of the values of a Cushitic people." From his photo collection: