The Sacred City of Kandy is situated on a plain, in the middle of what is called the Hill Country. Tea plantations and cool hill stations surround it. Kandys existence dates from the 14th century. Until 1815 it even was the capital of the country, then called Ceylon.

Nowadays Kandy is most famous for the presence of the Temple of the Tooth. According to tradition, a tooth of Buddha is kept here. The tooth is said to be saved from his funeral pyre, in the 6th century BC. It was then brought to Sri Lanka and guarded there for centuries. A story goes that the original tooth was shipped to Goa by the Portuguese in the 16th century, and that the one kept in the Temple of the Tooth is a replica.

All in all, Kandy is a very popular and busy pilgrimage site for Asian Buddhists.

Kandy is a green city with 100.000 inhabitants. It is dominated by a large, central lake. Compared to the capital Colombo a stay here is a relief. There are several shrines to visit, and it is also a good place for walking tours. The Temple of the Tooth of course is the major sight. Watching the pilgrims even more ... each day the room where the tooth is saved is opened up to let the numerous visitors catch a glimpse. 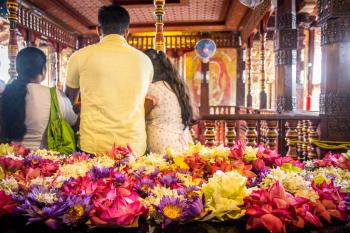 The highlight of Kandy is the Temple of the Tooth and I spent most of my time there. What I found most interesting was all the people there. Every generation within a family comes along together and spends time in the temple - often just sitting on the floor and hanging out together. It's a lovely portrait of the people in Sri Lanka and their relationship with their religious buildings.

Kandy is a really easy city to get to and it has good train connections with other parts of Sri Lanka and it's a pleasant way to get in and out of the city. 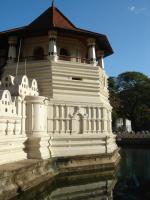 Kandy, the third world heritage capital city of Sri Lanka, is regarded as one of the most sacred places for Buddhists locating in the beautiful lush green hill country, a very contrast with dry flat land of Anuradhapura and Polonnaruwa. Similar to Anuradhapura, the center of Kandy is the sacred city, but for Kandy, its sacred area is quite small only comprise of the former royal palace complex and nearby associated shrines and temples.

The most important place of the sacred city is the famous Sri Dalada Maligawa or the Temple of the Holy Tooth Relic of the Lord Buddha. The temple is actually a part of the Kandyan royal palace, so the temple is a good example of Kandyan architecture, a Sri Lankan national style. Not only the temple, the nearby four small Hindu shrines for local gods and goddesses are also very interesting for study local belief that use Hindu gods as the protectors of Buddhism.

The Tooth relic is very important for Sri Lankan as it is the symbol of sovereignty over Ceylon, so every time Sinhalese move their capital city, the Tooth will go with them except Colombo. Even today the president has to come to pay respect the Tooth every year and become state tradition. Apart from local Sri Lankan, all Buddhist around the world especially Thai and Japanese come and make lots of donations to this temple as part of their pilgrimages.

Every visitor to the Temple of the Tooth has to walk on bare foot and pass security checkpoint as in Anuradhapura, but the atmosphere here is much more relax. Inside the complex is decorated with many beautiful objects from annual temple parade. The shrine that is housing the Tooth is very small but its decorative wall is truly a masterpiece of art. Hundreds of worshippers put their flower to make beautiful flower carpet liked in front of the shrine, praying and chanting for their good lives was an indescribable moment. After visit the shrine, do not forget to admire the beautiful golden roof donated by the Japanese government to protect the whole complex from rain and sun.

To be honest, if you are not Buddhist, this place is just another temple that has more beautiful decoration and lots of worshippers. But in terms of world heritage site, I will not question its spiritual value, this is the only place you can admire the last authentic of Kandyan royal architecture which can not be compared with any other place in this world, and this reason alone can make this place to be a world heritage site. I think this place is deserved to be protected by UNESCO more than many other European site that using only criteria IV for inscription.

Kandy is a lovely city, but I'm not convinced that it is WHS material really.

The Temple of the Tooth is interesting but is marred by some rather nasty political nonsence in one of the exhibition rooms.

Still, the city is a nice place to hang out for a few days before seeing the more interesting WHSs nearby.

I was in Kandy for one year stint as an expatriate in year 1998. Kandy is a small, serene and hilly city with a big man-made lake in the center. Its climate is perfectly nice for me. Ooops..Tamil Tiger suicide bombers bombed the temple of the tooth few days before I arrived at the city.

Kandy is like Mecca to Muslim, a holy city visited by many Buddhist worshippers especially on 1st and 15th day of the lunar calendar. The rooftop of the temple is coated with the gold sheet.

The annual grand parade or processing in somewhere June or July is an unforgettable event, not found in other part of this world. Singhalese dancers in traditional gears performing traditional dance and music in acrobatic movement to entertain bystanders and a platoon of elephants carrying Buddha tooth is truly eye-opening experience. This grand processing usually last for three long weeks!

Wesak day is a big celebration day to Singhalese people. Almost every house is decorated with lantern made from the bamboo and white paper.

Kandy botanical garden is a beautiful and magnificent tropical garden. Watch out for the countless of fruit bats hanging upside down on the treetop. Bad thing is foreigners need to pay 10 times more entrance fee than local folks.

Bull carts and elephants are still a mode of transport to some local people. Don't be panic when you see elephant is blocking your four wheels car. Lastly, I hope my friends in Sri Lanka can email me

Octagons: Temple of Tooth in Kandy
Gold Surfaces: The Japanese donated golden roof of the temple of tooth

Built in the 18th century: Royal Palace and the Temple of the Tooth date from the reign of Keerti Sri Rajasimha (1747-82)

Location for a classic movie: The Bridge on the River Kwai (1957)
Located in a Former Capital: The last independent Kingdom of Sri Lanka (1592- 1815)
On Banknotes: Temple of Tooth: 1000 Rupee issued 2001; 10 Rupees; 1982
Indiana Jones movie: Temple of Doom
Built or owned by Japanese: Golden Roof of Temple of Tooth
Undergoing Restoration or Repair: Queen's Bath House in Kandy (located in the lake close to the Temple of the Tooth) was covered with scaffoldings in November 2015.
Foreigner prices: (Tooth temple) USD 15, free for locals