Hortobágy National Park - the Puszta is the biggest grassland that remained in Central Europe.

Hortobágy is similar to a steppe, a grassy plain with cattle, sheep, oxen, horses, tended by herdsmen, and it provides habitat for various different species (342 bird species have been registered to appear).

Hortobágy National Park - the Puszta is a steppe landscape where man has left only temporary structures. Shepherds graze their horses, cows and sheep (species adapted to local conditions) here on the barren land. Fishponds were built in the early 20th century to vary the land use more. The park is also known for its variety of bird species. I had planned to focus mainly on the park’s natural features (though it’s a cultural site on our List) and I even brought a travel guide book to make the most of it. I had 1 full day here (stayed for 2 nights) and focused on Route 1 described in the guide book. This is an all-day circuit by car, with stops and short walks along the way. Officially you do need a permit to visit any site in the national park that lies off the main road, but since the Visitor Center wasn’t open yet at 8 am when I went out I decided to start without one (in the end I never encountered any controls).

The route first goes eastwards from the town of Hortobagy, on the busy road B33. There you’ll find 3 lookout towers. I climbed 2 of them – they provide wide views over the plains but you actually don't see anything of much interest. Afterwards you turn left off the main road and make a full loop via the northern side of the park. Here too the road is busy at first and there is a town with traffic lights, supermarkets and people who are just doing their daily things. The whole ‘steppe’ thing feels pretty small-scale if you have ever been outside of Europe. The best part of the route lies along the road between Telekháza and Hortobagy. This road is full of potholes, but that does make people not drive so fast (and they probably avoid it as well). For me it was handy that I could just stop the car at the side of the road when I saw something interesting. I was mainly looking for a sozlik, a ground squirrel that only occurs on the steppes of Eastern Europe. They like to stand on their hind legs and I thought I found one in front of a row of straw bales. However, when I zoomed in closer, I noticed its large ears so it must have been a hare.

Still from the same road I saw an old burial mound (known as kurgan). They were made by nomads and date back to the Stone Age. A bit further on I got out for a walk to one of the fish ponds. The walk starts at 2 rusted water towers - you follow the path first to the right and then to the left at a metal shed. The path runs between 2 fish ponds, but the shores are so overgrown with reeds that you cannot see anything of the ponds. After 15 minutes walking you arrive at a wooden watchtower. Just like the others I climbed on this day, it is not exactly in perfect condition - there is always a beam loose or a hole in the wood. However, here the climb is well worth it because it gives you a view on both fish ponds. The trail is not signposted, so that does keep it exclusive and there were no other visitors present. Later in the day I ticked off some more sights in the area, such as the Shepherd’s Museum and the Nine Arch Bridge. I had eaten at the historic Hortobagy Csarda the evening before, although I found better food next day at the Tiszacsege fish csarda. I even bought a permit (1000 forint / 3 EUR) at the Visitor Center to check out some more fish ponds. I tried hard to enjoy it all, but there are so many annoying things that keep distracting you from a satisfying visit. The permit system, the lack of information, the limited parking possibilities (or when there is, the payment for it), the busy roads and speeding locals. My best memories comprise encountering the shepherds and their herds in the fields early morning and late afternoon light.

Click here to see more of my photos of Hortobágy 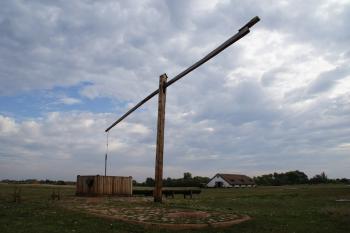 Puszta, a well-known term that is inseparably linked to Hungary. But what can be expected from this WHS? The last remains of an unspoilt cultural landscape with traces of the interaction between man and nature and pretty examples of rural architecture - sounds pretty good? Or flat and vast grasslands that looks the same in every direction, a paradise only for bird watchers - sounds rather dull and boring? To answer right away: it's a bit of both, but for me the boring parts outweigh the interesting impressions.

The village of Hortobágy is the centre of the park, here you find the visitor centre, the best-known csárda (with pretty good food), a shepherd's museum, and the Nine Arch Bridge (looks better on photos than in reality). Hortobágy has various opportunities for accommodation, we stayed for one night and were lucky to get the last available room in the hotel next to the visitor centre. There are also nice examples of vernacular architecture in and around the village and the nearby Mata Stud. The photo shows a farmhouse with an upstanding steep well, the symbol of the Puszta.

Large parts of the WHS are protected and can only be visited with a special permit and a guide, but there are three trails where the National Park is accessible (day tickets at the visitor center). First we went to the fish ponds at Halasto, a large system of artificial ponds that were created about hundred years ago, mainly for carp culture. Today the ponds are the habitat and breeding area for numerous rare water birds. We took the restored narrow gauge railway that rumbles five kilometres along the main dike up to the terminal stop, but you can also hike or ride by bike. Forty-five minutes until the ride back was more than enough time to stroll on the boardwalk through the reeds and to climb the look-out. We saw a herd of water buffalo on the train ride, but only few birds and few bird watchers. The peak season is in spring and September when migrating birds, geese and cranes, take a rest at the fish ponds. The train operator raved about a unique and memorable spectacle. Well, bird watching is not one of my greatest passions, so I'll never know.

The next day we went to the Szálkahalom trail, about eight kilometres east of Hortobágy on the road no.33, which runs right across the National Park. Just behind the parking lot is one of the kurgans, a burial mound from the Early Bronze Age. Actually just a low hill, without the information board no one would notice. Apart from that: farm buildings, small wood, and the Puszta - the main thing to see is that there is nothing to see, only the steppe soil, a few scattered trees and the horizon. We really tried to get the best out of this WHS and went to a third spot, the 'Egyek-pusztakócs', the trail starts at a parking lot about 20 kilometres west of Hortobágy. Again, a section with the characteristic salt soil and grass. The main sights are a marshland with reed and an isolated farm. But we did not go all the way, halfway we came to a fencing with gray cattle, really handsome animals with impressive horns. We took this as the highlight of the visit and returned to continue our trip.

Don't get me wrong, the Hortobágy National Park is a unique landscape. In Western Europe, similar areas have disappeared long ago due to intensive agriculture. It is worth to be protected and the inscription seems to be justified, but this WHS did not fill me with enthusiasm. 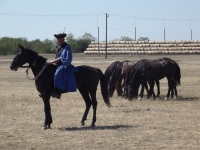 My visit to Hortobagy coincided with a fair in the village, to which people from all over Hungary had come. So besides seeing the heart of the National Park, there was also entertainment and traditional handicrafts and food.

However I had come to see the Puzta, so I was directed to Mata, the horse stables to the north of the village. Here I joined a fleet of horse-drawn carts for an inpection tour of the horses, sheep, oxen, water buffalo and grey cattle, all spread out across the grassy plains.

Trains from Eger to Debrecen call at Hortobagy station, situated midway between the village and Mata.

We came to Hortobagy this year on July , only one day because it was on your way to Romania: but we'll come back ; Patkos Csarda Motel is a lovely place; Puszta Camping can be fine too. We love hungary food. And there is such a lot of different birds, even if we dont't stay there during a long time; we spent a good time in a boat on the Tisza Lake and magyar people are so kindly; we can speak english with young people.

I visited Hortobagy last year and stayed there for one week which I see optimal. The tourists come mainly for one day which is nothing - there are too many places to be seen. I would add to the text that there are living unique sorts of animals (e.g. grey cattle) and hundreds of birds species partly living there and partly migrating. I see the last year price of entry pass reasonable. In the village Hortobagy there are 3 hotels of differrent comfort and of course prices, camping and some offers for private accomodation - everybody can choose.

Has RAMSAR and Biosphere inscription but not important enough for WHS

1988 Requested by State Party to not be examined

Steppe
Aurochs: The "Hungarian Grey" also known as "Hungarian Steppe cattle is an ancient breed of domestic beef cattle indigenous to Hungary" (Wiki). It is believed to have been developed from Aurochs (among others. A herd is maintained in Hortobagy and is involved in a project to breed "reconstructed Aurochs"
Otters: In the fishponds
Turtles and tortoises: European pond terrapins

Pastoralism: a grassy plain with cattle, sheep, oxen, horses, tended by herdsmen
Aquaculture: the creation of artificial fishponds between 1914 and 1918 and again in the 1950s (AB ev)

Astronomy and Astrology: "An important part of this heritage is the celestial knowledge of the shepherds of the Puszta."

Built in the 2nd Millennium BC: The nomadic group who arrived around 2000 BC at the end of the Bronze Age were the first to leave their imprint on the natural landscape in the form of many burial mounds (kurgans ).

Name changes: Puszta added (2003)
Incorrect UNESCO 'Number of locations': no separate map, but the maps in the nomination file (page 50/51 and 95/100) show about ten different areas of various size
Ten years or more to inscribe: 1988-1999
No Buffer Zone