Hattusha is the old capital of the Hittites, a people that lived during the period of the Egyptian pharaohs.

Its heydays were from 1375 to 1200 BC. The WHC named as reasons for the inscription: its urban organization, the types of construction that have been preserved (temples, royal residences, fortifications), the rich ornamentation of the Lions Gate and the Royal Gate, and the ensemble of rock art of Yazilikaya.

The Hittites built their capital on a site that could be well defended. It was surrounded by a wall, to fortify it even more. The wall was decorated with two gates, the Kings Gate in the southeast and the Lions Gate in the southwest.

Hattusha only is an interesting place to visit when you know its history. The remains are really old, so not much is left. Also, the heat on this plain can be burning. For more interesting examples of Hittite culture, visit the Anatolian Museum in Ankara. Hattuşa is a key site for getting a good understanding of one of the major Bronze Age civilisations in the Eastern Mediterranean, contemporary to the Minoans and the early dynasties of the Egyptian New Kingdom.  It is the capital of the Hittite Empire, spread out over a vast area, discovered only in the late 19th century and excavated since then with many of the findings now in various museums in and outside Turkey.

The UNESCO heritage sites consists of two parts: Hattuşa and Yazılıkaya.  There are other important sites nearby that you need to visit in order get a clear overview: Alacahöyük and Şapinuwa.

Before going to the Hattuşa site it would be good to stop at the Boğazkale Museum, which is modern and not too big.  It shows in chronological order a small part of findings ranging from the Chalcolithic to the Byzantine Empire.  The Hittite Sphinx gate with two of its four sphinxes, one returned in 2011 from Germany and the other from Istanbul, is the museum’s key attraction.  Also other rare artefacts returned from abroad and are now exhibited at the museum.

We visited in November 2019, not the usual tourist season; it was raining and quite windy.  This gave the area quite the mystical touch of a civilisation hidden in the mist.  The site is large, it’s perhaps best to go around by car to visit the highlights, like the Great Temple area close to the entrance of the site, the Lion’s gate and its unique pyramidical structure, the Earth gate with its mysterious tunnel stretching 71 meters through an artificial mound, the King’s gate with a copy of a taller than life size warrior standing guard, the Sphinx gate with one original sphinx, two copies (originals are in the Boğazkale Museum) and one lost; from here the view across the upper city and its temple area is quite something.  There are other important sites but with very little to see, such as the state archives where a vast number of clay tablets were found, including the famous Hittite-Egyptian treaty of Kadesh (first ever recorded peace treaty) now in the Museum of the Ancient Orient in Istanbul; and the royal palace.

Yazılıkaya is about 10 minutes drive away, it’s a religious place carved in a rocky hill site, famous for its reliefs depicting kings, queens and gods.  The serenity of its surroundings make you still today understand that this was the holiest place in the Hittite Empire.  The “Greater Gallery” is decorated with a relief showing gods and goddesses. The “Lesser Gallery” is protected by demons with lion heads, human body, and wings.  The most impressive relief here shows twelve gods with very distinct facial expressions standing in a row.  There are also three niches cut into the rock, possibly used for placing gifts, or holding the urns of members of the Hittite royal family.

Alacahöyük, some 35 km north of Hattuşa/Boğazköy was discovered in 1835; it was an important Bronze Age cultural and art centre; fifteen layers of settlement are buried here. At the entrance stands the Hittite Sphinx gate displaying a double-headed eagle and copies of relief work showing the king and queen praying in front of a bull statue, the symbol of the storm god. Most of the reliefs and sphinxes date to 1,400 BC.  The originals are exhibited in the Museum of Anatolian Civilisations in Ankara.

Not far from the gate is the site of pre-Hittite royal tombs dating back to 3,000 BC, one the most important finds for this period.  Rectangular stone-built graves were found here with very rich personal belonging, including weapons, gold and silver containers and jewellery, and animal sculptures made of bronze and clay, now on display in the on-site museum.  There are many more artefacts exhibited in the Museum of Anatolian Civilisations in Ankara.

Best way of getting to Alacahöyük is by car.  The site is open every day and entrance fee at time of writing was 10.-TL.

Şapinuwa was only discovered by chance in the 1990s.  It is understood that it was the second capital of the Hittite Empire with a royal residence, a religious centre (Ağılönü) and very rich archives from the second millennium with tablets written in Hurrian, Akkadian and Hittite or in combinations thereof providing also vocabulary lists.   You can see the foundations of a partly excavated large building “A” made of carefully carved blocks of limestone and sandstone, which could have been a government building or a palace. Not far from it is building “B”, also large but more of the warehouse type.  Nearby building “C” was a religious structure. One of the recent excavations is building “D” with a four-sided stone slab covered with reliefs showing a king or warrior.

Admission is free. Also here best means of getting to the site is by car.  Dolmouşes run from Çorum to Ortaköy which is about 3km from Şapinuwa. 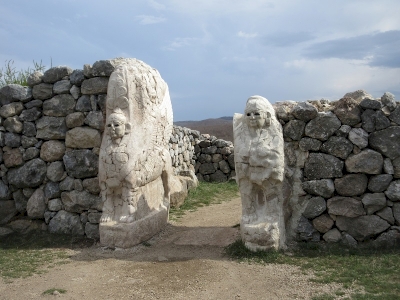 Sometimes this site surprises me – some sites, even remote ones from T-list, have plenty of reviews, where the others, much easier to visit, barely have any. The latter is the case of Hattusa, where until now there were only a few sentences. And the site is not remote and was visited by more than 60 travellers, which places it in upper half of most visited Turkish WHS.

Hattusa is archeological area which served as capital of Hittite empire from 15th to 11th century BC. There are many well preserved remainings, such as ruins of palaces, temples, city walls with well preserved gates and underground passages. Relative proximity of Cappadocia makes this site quite popular among tourists, including international groups. Sometimes there were even queues to the most popular parts. I had a problem with Hattusa – although most of the site is undoubtedly original, I think some of the monuments – including the most popular sculptures, are replicas (or, to be precise, modern reconstructions). Apart from this, we enjoyed our visit, even my children found it interesting, especially city walls with Yerkapi rampart. The whole site is really big and can't be reasonably done on foot – car is the most convenient, though you can do it on a bike (I did not see any bike rental though). Even with driving from one point to another visiting can take at least two hours. At the end of April it was quite warm but I cannot imagine how hot it is during summer – and there was not too much shade.

When you are there, go to another interesting site nearby. Alaca Hoyuk, a few kilometers from Hattusa, although not part of the inscription (not even on T-list) has a lot to offer, including gate with two original sphinxes (more similar to Egyptian ones than those in Hattusa) and many interesting reliefs.

Visited in August 2008. The Hittite building style was stone foundation topped with mid-brick walls - in 2500 years the mud-bricks have disappeared so you need a good guide book and a good imagination. But the sheer scale of the site is incredible - you can't walk round it, you drive. Make sure you visit the other Hittite sites nearby with some beautiful stone reliefs

Hittite capital Hattusha: A victim of the Germany-Turkey diplomatic spat (28.08.17)

Archaeological 'Type Sites': Hittite civilization: Boğazköy, the site of the Hittite capital of Hattusa, is naturally the type site for this cultural period (The Oxford Handbook of Ancient Anatolia: (10,000-323 BCE) - Page 80)
Ancient Anatolian cultures: Hatti and Hittite cultures
Hittites: Capital of the Hittite empire. The decipherment of the Hittite language by Bedrich Hrozny in the early 20th C enabled the Boghazkoy tablets discovered at Hattushas to be read and the Hittite version of events at Kadesh to emerge
Bronze Age Collapse
Excavated by the Deutsche Orient-Gesellschaft: Hugo Winckler excavated at Boğazköy in Turkey from 1906 to 1911, uncovering the capital of the Hittite Empire, Hattuša. (wiki)

Writing systems: The Hittites used cuneiform letters. Archaeological expeditions have discovered in Hattushash entire sets of royal archives in cuneiform tablets, written either in Akkadian, the diplomatic language of the time, or in the various dialects of the Hittite confederation (wiki)
Language isolate: While Hittite is an Indo-European language, Hattic of the Hatti people who first built Hattusa is an isolate (sometimes connected to Northwest Caucasian)

Built in the 2nd Millennium BC: Criterion II: Hattusha exerted dominating influence upon the civilisations of the 2nd and even the 1st millenium B.C. in Anatolia and northern Syria. (AB ev)

Located in a Former Capital: Hittite Empire, 1650 BC-1250 BC
In the Istanbul museum: Yerkapi Sphinx
In the Pergamon museum: Sphinx (will be given back to Turkey)

Memory of the World: Hattusha Cuneiform tablet archives excavated at Hattusha, now kept in the archaeological museums of Ankara and Istanbul