The Garrison Border Town of Elvas and its Fortifications comprise a frontier town that was strongly fortified from the 17th to 19th century. It guards a key border crossing between Lisbon and Madrid.

The fortifications are of the bulwarked dry-ditched type (“Dutch school of fortification”): as such it is the largest surviving example in the world.

The site consists of 7 parts:

I liked Elvas tremendously: it's the authenticity and completeness of this fortified town that is remarkable in Europe in the 21st century. New developments have passed by, or at least are limited to the neighbourhoods outside of the city walls. Arriving here already is a spectacular experience: first you notice the enormous aquaduct, connecting the heart of the town with a water source in the far distance. Then it's time to tackle one of the four city gates - clearly made during times without motorized vehicles. I was thinking "This looks like a pedestrian gate, I shouldn't be driving here." But it was OK, although I caused a minor traffic jam when I wasn't able to release the handbrake of my rental car. The city streets are as narrow as the gates, so I was happy that I could leave my car behind at the hotel parking. I slept in one of the monuments by the way, the Hotel Sao Jao de Deus is located in the former military hospital. The town also still is very low-key. Like the other reviewer I found almost everything closed - churches, castle, munition depot. The uniformity of the townscape however is pleasant enough. I also walked across to the Fort St. Luzia, on the opposite hill. The gates were open and two men were working there. No ticket office however, and I just walked around on my own for a while. From here there are good views on the fortifications around Elvas. 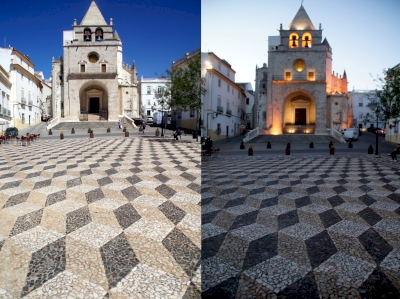 ‘♥ elvas’ is written in large letters at the Praça da República, the central square of Elvas. And that could also be the summary of my review. This fortified town on the border with Spain was the biggest surprise on my Portugal trip in May 2018. It consists not only of the historic town centre but also includes several forts outside the city walls and the Amoreira aquaduct, which secured the water supply even during a siege.

The first surprise was how large this system of walls, bastions and ravelins is. Standing at the Castelo, the highest point of the Historic Centre, and looking across to the fort on Monte de Graça, one inevitably wonders why such extensive fortifications were built in this barren landscape. The answer is that this region played a key role in the battles with Spain for Portuguese independence in the 17th century. And in response to advancing military technology with greater range of the guns, the fortifications were continuously extended during the following two centuries.
The second surprise was how well preserved the inscribed sites are. Apparently, the nomination and eventual inscription in 2012 allowed for necessary restorations. As an example, Fort Graça was in an almost dilapidated condition and was only opened to the public in 2015 after extensive renovations.
And the third surprise was the almost complete absence of tourists. This adds significantly to the pleasure of strolling through the historic old town. But this also means that not every building and every church is open to visitors. Most military buildings are today used for a different purpose. Still, there is much to explore in this charming town with its whitewashed houses, winding narrow streets and cosy squares. The heart of Elvas is the Praça da República (photos), already mentioned at the beginning. It was the most impressive example of the Calçada Portuguesa (a paving typical of Portuguese squares) that I saw on my trip.

Elvas is actually not very big, but it still takes some time to walk all the way along the city walls. The layout of the fortifications is star-shaped, similar to Palmanova in Italy or Neuf-Brisach in France. However, these two examples are located in plain landscapes. In Elvas, the defence constructions were perfectly adapted to the slopes of the hill on which the town was built.
Visitors should allow enough time to visit also the two largest forts, Fort Santa Luzia and Fort Graça. Both can be visited with an entrance fee. At least Fort Graça is a must see. It is a star-shaped fort consisting of three lines of defence around a central tower. I would recommend using an aerial view to get a better idea of how all these bastions, walls and dry trenches work together. The satellite view of Google Maps was very helpful.

I spent one and a half days in Elvas and stayed two nights at the Hotel São João de Deus, the former military hospital, which is mentioned in the nomination document.
Elvas is a hidden gem that has not yet been discovered by the tourist masses. I enjoyed my visit very much and to sum it up: ♥ elvas. 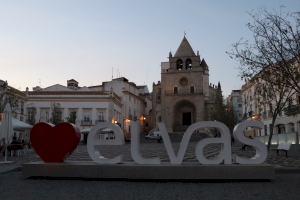 October 2020 - our third night in the camper we spent in Elvas. Just next to the aqueduct there is a parking lot, with a beautiful view at the fortification. The town is small enough to stroll along the bulwark and through the city center. From the top, we could look over to Spain. The main square has a Escher-like pavement and is really one of the highlites. Some cafes offered food on the main market, so thats where we had dinner. Another walk in the evening revealed how poor the city is. The flats some streets away from the market are tiny, in bad shape, dogs are lingering on the streets, and it does not quite feel like this town is profiting from WHS status. However, the night at the aqueduct was nice, especially the next morning with fog hanging on that marvelous building. Next morning, we proceeded our way to Serra de Estrella. 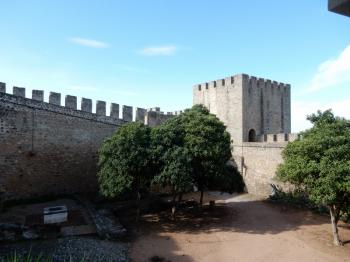 Today, the border between Spain and Portugal is hardly visible, but in centuries past, it was heavily fortified and fought over. There is a fair number of fortified border towns in both countries (some of them also striving for WH status), but the best one is certainly Elvas, guarding the approaches to Lisbon on the main road from Madrid and Badajoz. Fought over various times throughout the centuries (with the Spanish and Portuguese sometimes on the same side, as in the Napoleonic Wars), Elvas is a great example of military architecture. The town is surrounded by massive walls and has several huge forts outside. I spent quite some time in the biggest one, Santa Luzia, which also features a military museum. This fort and the castle of Elvas, dating from Arab times, both offer great views over the surrounding area and give an impression of the strategic location and importance of the town, which also features several interesting non-military attractions, especially the Amoreira Aqueduct and the beautifully decorated Dominican Church. Elvas is definitely worth a day of exploration, and is conveniently located between Mérida and Évora. 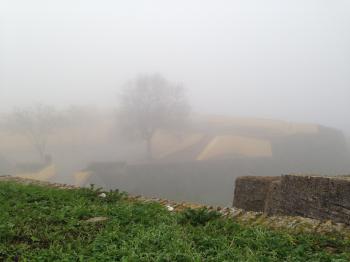 Can you imagine that being in Elvas you do not see this huge fortification that encompass the old part of the city? It happened to me when I get there at the end of December last year. The fog was so dense that I even had some problem to find the way from the bus station to the city center and back. All I noticed that most of the fortifications were painted yellow, even the barracks and most military buildings from XVII century were painted in that colour. The oldest parts of the walls date from X century, but the strong fortification started being built in XVII c. You can walk around the city, passing by Castelo to the north, and Aqueduto da Amoreira to south-west. The only place I really enjoyed was the Iglesia de Nostra Senhora da Consolacao – a small church full of beaufitul azulejos.

I visited this WHS in August 2014 on my way back to Spain by car. Most of the nearby villages or towns are heavily fortified being close to the border with Spain. In my opinion it's worth visiting Estremoz too if you have time. Let's focus on Elvas now. Elvas is really a hidden gem and indeed one of the best WHS Portugal has to offer. Having been inscribed quite recently it is in tip-top condition and still not many tourists visit. The main highlights are the Forts of Graca and Santa Luzia but the historic centre, the aqueduct and the other fortifications make a pleasant stroll. I'd love to visit again should I ever buy a camera drone to be able to see Elvas from above! By the way, if you want to try yet another bacalhau dish, go for the bacalhau dorado! You won't be disappointed.

I just got back from Elvas on a day trip from Evora.

Everything seems to be closed today, or at least they only opened in the morning. It is a public holiday here. The streets were really quite empty but that suited me fine. There were also very few tourists.

I managed to walk around the city along the walls or the ditches. The walls were well-preserved. I also walked around the Fort of St Luzia and the tiny Fortalice of St Mamede. I could not enter both either. The former was supposed to house a military museum, but it was closed. The latter seemed to me to be a private dwelling now and when I got close the dog inside went mad.

The one thing I managed to get into was the tiny Church of the Dominicas. This used to be part of a monastery. The interior walls and covered with gorgeous azulejos.

The aqueduct was nice too and very well-preserved.

I think that Elvas can make a nice day trip from Evora. If only things were opened today. Better get there before it becomes another tourist hotspot!

The Garrison Border Town of Elvas and its Fortifications

On National Border: With Spain

Sieges and Battles: Battle of the Lines of Elvas (1659), between Portugal and Spain.

Built in the 17th century: it was from the time of the restoration of Portuguese independence in 1640 that the great fortification scheme seen today began to take shape (AB ev)

Built or owned by Dutch: The fortifications were designed by the Dutch Jesuit Cosmander, based on the treatise of fortification engineer Samuel Marolois, whose work together with that of Simon Stevin and Adam Fritach launched the Dutch school of fortification worldwide. (AB ev)
On Passports: Portuguese passport

Lisbon hotspot: 200km from Lisbon
Extremadura Hotspot: Trains run to Badejoz and from there you can take a bus.