The site was known and used for its strategic location by the Inca and the Spanish, hence its name "El Fuerte" (The Fortress). At 1920m above sea level in the sub-Andean, it was an intermediairy stopping point between the Andean highlands and the lower areas. There have been various alternative explanations about the use of the site, varying from a place for washing gold to a take off- and landing ramp for ancient spacecraft.

How often have you had a WHS all to yourself? I can think of only a few times when it has happened to me (the last time was in Fontainebleau, of all places). Well, on the Tuesday morning that I arrived on foot at the entrance of El Fuerte, I was the first to sign the visitor book for the day. It was 10.15 by then already. The days before hadn't brought many visitors either: about 5-10 a day on average. The friendly lady in charge, who had seen me walking up from afar, sold me a ticket for 50 bolivianos (5 EUR), gave me a map and sent me off on the predescribed circuit of the site. The track is 2km long, and involves quite some climbing until you get to the very top of the hill. There they've made two viewing platforms where you can admire the sculptures from above. It's really a weird slab of rock. I can see why imaginative researchers have come up with the hypothesis that the rock was used as a kind of airfield. It looks just like that little take off- and landing strip at Lukla in Nepal! Just a short stretch of flat road before diving off into an unsure flight amidst the mountains.

The map that is included with the entrance ticket shows the position of the most prominent sculptures, a bit like the map they give you in Nazca. The motifs here are even more difficult to distinguish than those at the Nazca Lines - a lot of the rock sculptures have eroded. The two felines I really could not see. The channels and the geometric pools are the most clear ones. The track then leads you down to the former Inca town. Not much more is left of it than walls of groups of buildings. It gets more interesting at the end again, where you're allowed close to the rock to observe the Five Niches, an Inca temple cut out of the rock. There may be not a lot left to see here, but the visit in general was very worthwhile. That's mostly because of the wonderful natural surroundings of the site. It is located in the Amboro National Park, with great mountain vistas and abundant birdlife. I think I even spotted a Condor (I saw one bird with a giant wingspan). I walked both ways to and from the site from Samaipata, 10km each way, which I can really recommend when you want to enjoy the natural beauty of this place. The site itself is well-cared for, even with so few visitors. There's a kiosk to buy drinks and snacks, and the circuit is partly made out of boardwalks. 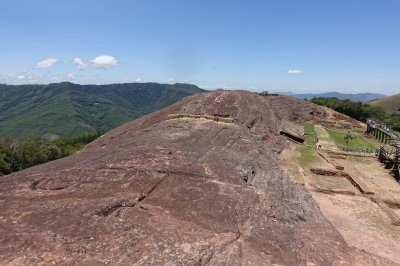 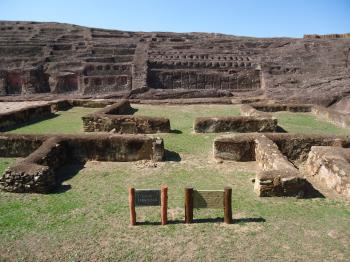