Byblos was an early Phoenician settlement, associated with the history of the diffusion of the Phoenician alphabet. It was a maritime commercial city with strong trade relations to Egypt.

The town is believed to have been founded around 5,000 BC, making it one of the oldest continuously inhabited sites in the world. It was turned into a structured city with walls in about 2,800 BC.

Byblos is located on the Mediterranean coast of present-day Lebanon. It is attractive to archaeologists because of the successive layers of debris resulting from centuries of human habitation: neolithic, chalcolithic, Assyrian, Roman, muslim and Crusaders.

Although Byblos (nowadays known as ‘Jbeil’) lies only 35 km north of Beirut, it took the rickety local bus number 6 more than 1.5 hours to get me there. As always in Beirut we got stuck in traffic, and then slowly proceeded through casino-town Jounieh until we reached the Mediterranean. Finally we were leaving the highrise buildings and American fastfood restaurants behind. The drive northwards along the coast is quite pleasant, though many good spots have been taken over by large beach hotels and exclusive fish restaurants. The bus driver dumped me at an overpass, from where I walked down into the city center of Byblos. It is not difficult to find your way to the archeological site: just walk to the Crusader Castle, which is the highest building in the area. After paying the ´foreigners´ entrance fee of 8000 LBP (4 EUR), I started the long circuit of the complex. Paths lead to all corners of the site, with information boards in English, French and Arabic to explain what once was here. The origins of Byblos lie in the neolotihic and chalcolithic, so remains of this period are limited. Better preserved is the Roman heritage: a small theatre at a splendid location overlooking the sea, and a row of columns along a former Roman road. At the far end of the complex lies the Temple of the Obelisks, an Egyptian/Phoenician construction. A group of obelisks still is standing upright, which makes it look like a cemetery. My walk ended at the Castle – the first Crusader Castle I have ever been to. I admired its sturdy construction. Inside a museum covers two of its floors. The best pieces that were found in Byblos are shown in the Lebanese National Museum however: the sarcophagus with the first Phoenician writing, the colossal Egyptian-looking Bronze Age statue that dominates the main hall, the little delicate, flat bronze statues that were used as votive offerings. I spent about 1.5 hours on site, and enjoyed walking around it slowly. It was the busiest tourist site I have visited so far in Lebanon: there were about 30-40 other people, most of them in small tour groups. Before taking the bus back to Beirut, I had another good Lebanese lunch at Fenicia restaurant near the souk. 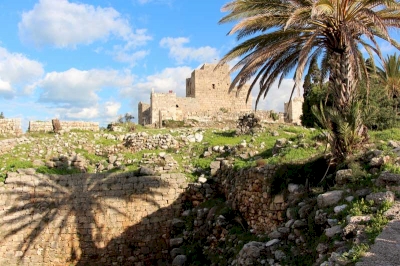 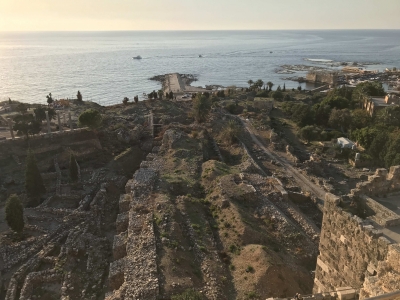 In the Louvre: The Yehawmilk stele
Foreigner prices: 6000 Lebanese pounds for foreigners, 4000 for Lebanese