At turbulent times in recent Lebanese history, Anjar was a difficult site to visit. Even now, in the calm 2010's, the Dutch Ministry of External Affairs warns against going there. The site is located only a few kilometres from the Syrian border. It was used as a Syrian militairy base during its long involvement with the politics of neigbouring Lebanon. Everything was very quiet though when I visited in early April 2012. I guess the Syrians are too busy with themselves at the moment. Having just visited Baalbek, Anjar comes across as a lesser example of Imperial Roman architecture. In fact it is from a much later date, the 8th century: the engineers just used a lot of Roman and Byzantine examples. The most impressive is the strict layout of the city, with a north-south and an east-west axis. At the crossroads there is a perfect example of a Tetrapylon. The story here is that all small compartments along the axes were used as shops, hundreds of them. That would have made the city one huge shopping mall. I wonder were all the people came from who bought stuff here. We spent about 45 minutes at Anjar archeological site (I was with a tour from Beirut). That was sufficient for me, it is mostly ruins that you can see. Besides our group of 6 a few other foreign individuals were visiting at the same time. The site is very low key: it lies on the edges of the modern village which is inhabited by Armenians. The landscape reminded me a lot of Armenia also: the mountains in the background, the agricultural fields, the simple village life. 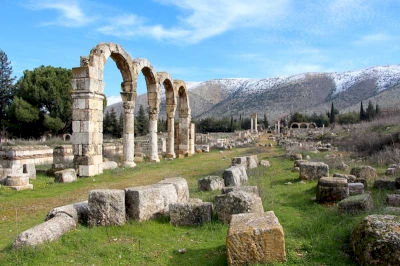 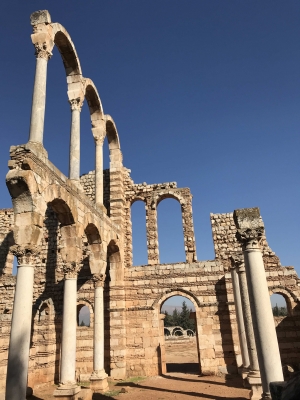 Umayyad Caliphate: OUV: “outstanding example of 8th century town planning of the Umayyad caliphate” and “... an eminent testimony, precisely dated, of the Umayyad civilization.”
Silk Road: According to ICOMOS Thematic Study from 2014