The Archaeological Site of Ani is a ruined medieval settlement that was a commercial center on the Silk Road and other trade routes into Anatolia.

Its heyday was in the 10th-11th century, when it became the capital of the Bagratid Armenian kingdom that covered much of present-day Armenia and eastern Turkey. At the time it was also the seat of the katholikos of the Armenian Church, resulting in fine examples of Armenian religious architecture and the nickname ‘City of 1001 Churches’.

All the structures at Ani are constructed using the local volcanic basalt, a sort of tufa stone which is easily carved. Notable remaining buildings include the Cathedral, the church of St Gregory of Tigran Honents, the citadel and the mosque of Manuchihr. The nominated area also includes the rock-cut dwellings and monuments outside the city walls.

Considering the history between Turkey and Armenia, this is a controversial nomination. I won’t go into detail here about the current Turkish political scene and its complicated opinions on what happened in 1915. But behind the scenes the acceptance of Ani as an important part of the heritage of this region has been in the making for almost 20 years. The site finally entered Turkey’s Tentative List in 2012. I visited Ani way back in 1992, during a 3-week-long group tour that took us all over Turkey by bus. I don’t remember much about Ani, only the remoteness (and excoticness!) of whole eastern Turkey is a clear memory. Ani itself for me is symbolized by that one ruined church (see first photo) and the deep gorge next to it that divides the two countries. Since then quite a lot seems to have changed. While looking for additional photos to accompany this post I noticed all kinds of buildings that I do not remember from 1992, some including interior murals. The website Virtual Ani covers all of them. Recent visitors confirm that it stil is an off-the-beaten-track destination though. Minor Sights describes his visit from 2012 as a lonely experience and helpfully suggests "Don't mention the war!" A Tripadvisor report from June 2015 hints at the very vast size of the site, the need to bring plenty of drinking water and the entrance fee of 8 Turkish Lira. We visited Ani (on the UNESCO list since 2016) in February 2020.  We had travelled on the Eastern Express Train from Ankara to Kars and then another 42km to the site (a public transport bus leaves from Gazi Ahmet Muhtar Paşa Konağı in Kars).  Many people had advised us to make this trip in winter because the snow covered plains and mountains are spectacular to watch.   Indeed, the journey through the winter landscape of Anatolia, and when arriving in Ani the contrast between the ruins in dark brown and grey stone, the white blanket of snow across the ancient city against a deep blue sky in the bright sun light, was impressive despite the biting cold with temperatures far below zero.

With roots going back to the Chalcolithic period, Ani, the medieval capital of the Bagratid Kingdom of Armenia is located at the old Silk Road in the East of Turkey, right on the border with Armenia - you actually can see the border posts on the other side; the city is situated in rather dramatic surroundings at 1300m above sea level, on its eastern side protected by a ravine and on its western side by a valley.

Its heydays were in the 10th and 11th centuries before the city of a thousand churches as it was called with more than 100,000 inhabitants was destroyed by the Mongols in 1236.  After several periods of revival the city was finally abandoned in the 18th century.  In recent history it was part of Russia, Armenia and since 1921 of Turkey.

The entrance to the site is at the old city gate in the village of Anikoyu (Ocaklı Köyü) and leads you through the ancient fortifications.  You step out into bright sunlight and can see the vast expense of the city with its highlights sticking out of the horizon.  Walking through the site (you need at least two to three hours) you pass the Church of the Holy Redeemer which was split in half by lightning; the Church of St Gregory of Tigran Honents - it stands half way down to the ravine and in winter it can be quite slippery getting down the step but the frescoes with scenes from the Bible and the life of St Gregory in and outside the building are all the worth the climbing; the Ani Cathedral which is the largest standing building in Ani, despite its collapsed dome and other damage is still an imposing structure; the Mosque of Menüçehr with its tall minaret, from its well preserved gallery you have a clear view down into valley where you can see the Silk Road Bridge and the Monastery of the Virgins; from here you get to the old market from where you see in the distance the beautiful silhouette of the small Church of St Gregory of the Abughamrents; other sites easily accessible are the Fire Temple of Zarathustra, the Church of the Holy Apostles, the caravansary, the citadel and the city walls, dating from the seventh to the thirteenth centuries. Your tour guide is likely to tell you that under the city lays a vast network of tunnels, corridors, meeting and prayer rooms; unfortunately this underground world of Ani is currently not accessible.

In the small village outside the archaeological site you will find a tea house and wash facilities; the tourist centre was not open yet at the time of our visit; also sign postings were still to come as part of an EU-funded project. The site is open every day; during winter (1 October - 31 March) 08:00-17:00; in summer (1 April - 30 September) 08:00-19:00; e-mail: karsmuzesi@kulturturizm.gov.tr; entrance fee (at the time of our visit) was 15 Turkish Lira; in summer bring water as it gets very hot and there is little shade.

The city of Kars with its historical assembly of buildings at the foot of the citadel; the avenues lined with Russian style buildings and the Russian military hospital church which is now a mosque; the many excellent restaurants serving goose and offering entertainment, some with local style troubadours singing to the guests; honey, cheese and carpet shops, is certainly a good starting point for exploring Ani and other sites like Sarıkamış, a modern skiing resort and battle ground in World War I; the bird paradise of Lake Kuyucuk and Lake Çıldır where in winter you can watch in the early hours of the morning fishermen hacking holes in the ice. 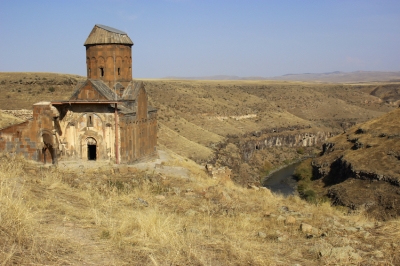 I had been fascinated by Ani for a long time, even before it was included on the WHS List. While travelling in Armenia the previous year, I had a far-away view of the site, from across the border, with no possibility to visit, the Armenian-Turrish border still being seald-off. I therefore decided to make a trip only to visit Ani in october 2018.

Luckily, domestic flight from Istanbul are convenient and rather cheap. There are several  daily flights to Kars (50 minutes from Ani), but I chose to get through Van (some 4 hours away) to also enjoy the area’s TL sites (3 around Van lake and one on the way, next to Dogubayazit). Renting a car is quite easy, but don’t expect anyone to speak english in any rental agency, or at police check-points (the area is close to Iran and Armenia borders). However, they all have Google translation on their mobile phone.

Ani is a triangular plateau formed of three valleys. It has been settled since Early Iron Age (BC 1200-1100), and slowly reached its heydays in the Mediaval time. It became the capital of Armenia in 917, and then of the Katholicos (religious seat) in 992. The location of the city on the Silk Road helped a rapid growth, which seemd to have reached 100 000 habitants around 1000. It was then called « the city of thousand and one churches ». It lost it capital status after invasions in 1045 but remained a cosmopolitan trade center where diverse communities lived together and numerous religious monuments were built. The city was abandonned sometime at the end of the 13 th century (due to Mongol invasion, transfer of the Katholikos to Yerevan or destoyed by earthquake, depending on the source).

With a rental car, Ani is very easy to reach, at the end of a well maintained and well signposted road 45 minutes from Kars. There is a bus everyday from Kars leaving two hours to visit the site.

On the site, the first thing we see is the impressive double line of fortifiction. A 10 lira entrance fee is asked as you pass through those fortification. And then lies the triangular plateau where the city once stood, a bare meadow dotted with numerous stones, and a few buildings. They are all made of local volcanic reddish basalt, which give then peculiar appearance and are all in very different state of conservation. There is the central cathedral, numerous chapels and churches spred around the site, a mosque built in 1031, the foundation of a Zoroastrian fire Temple, the citadel high on a hill, the ruins of a Silk Road bridge over the river, and a spectacular fortress at the bottom the hill, near the merger of the valleys.  On the slope of one of the adjacent valley, visible from Ani, is a rock-caved village.

My favorite building is the church of St Gregory of Tigrant Honents (see picture), one of the best preserved monument (built in 1215), overlooking the deepest valley, with very nice view on the river gorge and across the Armenian border, and with spectacular wall paintings.

Allow at least two hours, or better three hours to take full advantage of the site. One of he main feature of this site is its vastness and emptiness. Being far away from touristic roads and closed to visitors from Armenia, very few people get to visit this place. There way probably 6 or 7 tourists while I visited, lost in the 85 hectars of the plateau. Building can almost all be entered, and only the furtherst fortress seem to be off limit.

A last piece of advise : while in the area, the monastery of Khtzkonk and the basilica at Mren (both 7th century) are worth a visit, even if they are very difficult to reach (use google map, as no signs at all) and require to walk (about 2 hours roundtrip for Mren). Maybe a future extension or a new nomination…

Inclusion of Ani creates guarantees of its conservation, Armenians say (21.07.16)

Destroyed or damaged by Earthquake: devastating earthquakes in 1319 and 1605 (AB ev)
Destroyed during invasion: The Mongols unsuccessfully besieged Ani in 1226, but in 1236 they captured and sacked the city, massacring large numbers of its population (wiki)

On National Border: Between Turkey and Armenia

Located in a Former Capital: Between 961 and 1045, it was the capital of the Bagratid Armenian kingdom that covered much of present-day Armenia and eastern Turkey (wiki)

WHC locations: Istanbul (2016)
Cultural landscape not recognized: Ani was originally nominated as a cultural landscape, but in a revision dated February 2016, Ani was put forward as an archaeological site by Turkey (ICOMOS regarded "that the comparative analysis is insufficient to demonstrate that the property is an outstanding example of a cultural landscape" AB ev)