The Amphitheater of El Jem is an immense theatre in the classic Roman town of Thysdrus (now El Jem), dating from the 3rd century.

The elliptical theatre had room for 60.000 spectators. The amphitheatre of El Jem was made a WHS because of the accomplishment of its construction and as a symptom of Roman imperial propaganda.

I have literally just returned from a trip to Tunisia and visited El Djem, Carthage, Dougga and Thubouro Maius - stunning! This was very special, thinking about walking where Romans have walked before. All of these are sites not to miss.

magnificent place to see was blown away!!! 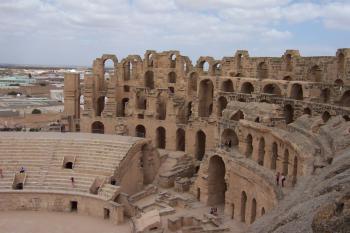 while the trip was marred by filming, the whole beauty of the site is overwhelming. You will never get more closer to a site than El Jem

Unfinished constructions: the amphitheatre was never completed due to political rivalries and lack of funding.

Used in film as another WHS: Gladiator (as Rome)
Location for a classic movie: Life of Brian (1979)