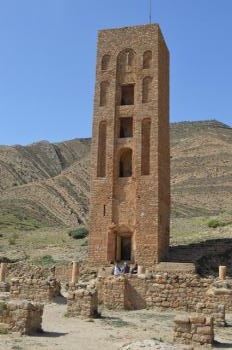 Notable minarets: The minaret of the Al'Qal'Qh, 25 meters high, is the prototype of the three-tiered minaret composition which may be seen, notably at the Giralda of Sevilla. It is the oldest in Algeria after that of Sidi Boumerouane. (AB ev)

Archaeological potential: The gardens have not yet been explored by archeologists, although ornamental fountains have been discovered (wiki)