The Ahwar of Southern Iraq: refuge of biodiversity and the relict landscape of the Mesopotamian Cities covers the marshy delta that was home to the early Sumerian civilization.

The area lies in the joint delta of the Tigris and Euphrates River, the river providing arable fields via the use of irrigation. Due to draining of large portions of the marshes, the marshes were diminshed to 10% of their original size by 2003.

Map of Ahwar of Southern Iraq 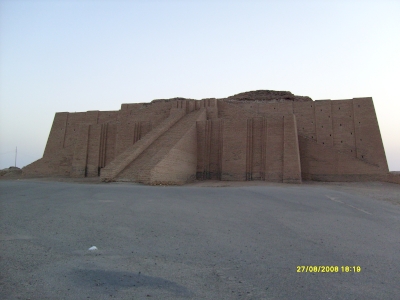 I visited this region of Iraq in the Fall of 2008. An opportunity arose for myself and some companions to visit the site of the ancient Sumerian city of Ur. I had seen pictures and read about the Ziggurat of Ur since I was a boy so I jumped at the chance. The greatest surprise was how extensive the ruins of the rest of the city are. We parked in the lot at the base of the Ziggurat and climbed up the steps to the top. From there the ruins reached out covering a vast area of the desert. Upon climbing down, we walked towards the rest of the ruins to explore but were stopped at the voice of a man calling to us from a distance. He approached and told us that the rest of the ruins were off-limits. We let him know that we meant no harm and were fascinated by the history of this ancient place. It was then that he introduced himself as Dhaif and explained that he was the caretaker of Ur. He said that his grandfather had been foreman of the workers during the archaeological excavations in 1922 and stayed on the site to take care of it after the British left. His father took over in the 1960's and he took over care of the place in the 1990's. He then offered to give us a tour of the entire place so, of course, we accepted. Over the next hour and a half he showed us the world's oldest known standing arch, the ruins of the palace of King Nebuchadnezzar, the Royal Tombs of Ur, and the House of Abraham. Possessing three generations worth of knowledge on the area, Dhaif was the perfect tour guide. With the wars in the area winding down, I would highly recommend a trip to this location for anyone interested in walking through several thousand years of ancient history. 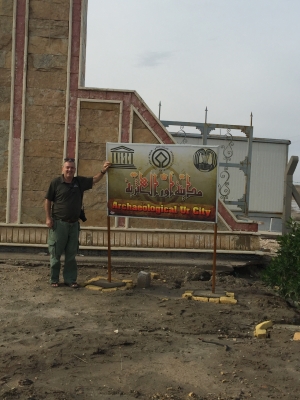 Ur was once an important Sumerian city state near the mouth of the Euphrates river, at the coast with marshy surroundings and regular floods and adverse weather impacts like erosions.Ur was already occupied as early as 6500 BC during the Urbaid period, but had its peak during the Sumerian period about 3000 BC. Buildings were made out of mudbricks and mud plaster. The main temple, Ziggurat of Ur, was built during king Ur-Nammu reign about 2040 BC. His codes of law (Hammurabi) is the oldest existing deciphered law writing in the world, the original at the Louvre museum, but replicas in many places including the National Museum of Iraq in Baghdad. On the basalt stele are 282 laws including the famous “an eye for an eye, a tooth for a tooth” rules. Ur is also mentioned four times in the Old Testament and in the Book of Genesis as the birthplace of Abraham 2000 BC.The site was first excavated 1853 by the British Museum and the British Vice Consul in Basra who also uncovered the Ziggurat (main temple dedicated to the Moon god Nanna)It was later on reconstructed, including its monumental staircase. However, the third level has collapsed, and its present height is 17 meters from the original of 26. Ur is surrounded by 2 ramparts constructed during Sumerian and Babylonian times. The closest city with infrastructure is Nasariyah, it has decent hotels and restaurants and at present no security problems. We have also visited Uruk where we could talk to German archaeologists at work to stabilize the temples, under the management of the DAI, the German Archaelogical Institute and Margarete van Ess who played a vital role in the conservation of archaeological sites of Babylon, especially Uruk und Ur.

Merger of 2 TWHS: The Marshlands of Mesopotamia & Ur

The Ahwar of Southern Iraq: refuge of biodiversity and the relict landscape of the Mesopotamian Cities

River deltas: joint delta of the Tigris and Euphrates River

Oldest Buildings: 5000-3000 BC "The archaeological cities of Uruk and Ur and the Tell Eridu archaeological site form part of the remains of the Sumerian cities and settlements that developed in southern Mesopotamia between the 4th and the 3rd millennium BCE in the marshy delta of the Tigris and Euphrates rivers."
Babylonian Empire: ... offer a complete testimony to the growth and subsequent decline of southern Mesopotamian urban centers and societies from the Ubaid and Sumerian periods until the Babylonian and Hellenistic periods. (Nom file)
Achaemenid Empire: Esagila Temple in Uruk
Parthian Empire: Temple of Charyos in Uruk
Assyrian Empire: Uruk went into a steep decline until about 850 BC when the Neo-Assyrian Empire annexed it as a provincial capital. Under the Neo-Assyrians and Neo-Babylonians, Uruk regained much of its former glory (wiki)
Mesopotamia: Includes the remains of the Mesopotamian cities of Uruk, Ur and Eridu
Excavated by the Deutsche Orient-Gesellschaft: Uruk

Sea Ports: Ur was a port at the Persian Gulf
Language isolate: Sumerian (Ur)
Writing systems: the centralized control of resources and surplus which gave rise to the first writing system and administrative archives (nom file). The earliest texts known were found in Uruk.
Irrigation and drainage: draining the marshes and the building of dams and irrigation canals were major technological breakthrough first introduced under the Ubaid period and further perfected by the Sumerians who later built dams on the Tigris and Euphrates to expand agriculture far inland. (nom file))

Ibn Battuta: Possible: "But I set out for al-Basrah... Our way lay alongside the Euphrates [probably an error, since Ibn Battuta stops at Wasit en route to Basra, and Wasit is on the Tigris River] by the place known as al-Idhar, which is a water-logged jungle of reeds, inhabited by nomad Arabs called al-Ma'adi."

Mentioned in the Bible: Ur is considered by many to be the city of Ur Kasdim mentioned in the Book of Genesis as the birthplace of the Hebrew and Arab patriarch Abram ... There are however conflicting traditions and scholarly opinions identifying Ur Kasdim with the sites of Sanliurfa, Urkesh, Urartu or Kutha. Ur is mentioned four times in the Torah or Old Testament, with the distinction "of the Kasdim/Kasdin"—traditionally rendered in English as "Ur of the Chaldees". The Chaldeans were already settled in the vicinity by around 850 BC, but were not the rulers of Ur until the late 7th century BC, around 550 BC. The name is found in Genesis 11:28, Genesis 11:31, and Genesis 15:7. In Nehemiah 9:7, a single passage mentioning Ur is a paraphrase of Genesis. (Nehemiah 9:7) (wiki)
Goddesses: Eanna, the temple of the Goddess Inanna at Uruk
Legends and Folk Myths: The Gilgamesh Epic originated from Uruk likely as a "reflection of the city's power and influence" (nom file)

Astronomy and Astrology: Bit Resh in Uruk
Excavated by American Universities: Ur was excavated by the University of Pennsylvania

Built in the 4th millennium BC: The cities flourished between 4th and 2nd millennium BC (AB ev)
Holocene: The natural components ... as we know them today were formed 3000 years ago. (Nom file)

In the Pergamon museum: Inanna temple of Karaindash from Uruk.
In the British museum: Uruk Trough (also Royal Game of Ur and Standard of Ur, which both may seen as portable)
History of the World in 100 objects: Standard of Ur
Minority communities: Different tribes known together as 'Marsh Arabs'
Located in a Former Capital: Ur was the capital of Sumer during the 3rd millennium BC
Dubbed as another WHS: Uruk is dubbed Venice of the Desert (wiki)
Former Largest Cities: Uruk: "At its height c. 2900 BC, Uruk probably had 50,000–80,000 residents living in 6 km2 (2.32 sq mi) of walled area; making it the largest city in the world at the time." (wiki). Eridu was the largest City around 3700 with 6000-10000.

Ramsar Wetlands: Huwaizah Marshes
Global Heritage Fund: Ur: Since 2009, the non-profit organization Global Heritage Fund (GHF) has been working to protect and preserve Ur against the problems of erosion, neglect, inappropriate restoration, war and conflict. (wiki)
Part of Our Top 50 Missing: Ur

First sites filling gaps cited by ICOMOS: Mesopotamian cultures 2016
Derived from more than one TWHS: Ur & Marshlands of Mesopotamia
Postponed sites: In 2015 (for nomination in 2016): postponed at the request of the State Party