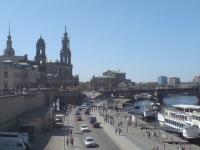 International experts from UNESCO recommended the building of a tunnel instead of a bridge so the site can retain its World Heritage status. (2008.03.15)

Georg Milbradt, premier of Germany's Saxony state, criticized on Monday UNESCO's World Heritage Committee, saying its demand for a halt in a bridge-building project lacked respect for democracy. The committee, meeting in Christchurch, New Zealand, had Monday warned the eastern German state that it had until October 1 to submit an alternative plan for a river crossing 4 kilometres east of the city of Dresden. (2007.06.26)

A Saxon state court has ruled that a bridge project in Dresden, approved by referendum in 2005, should go ahead despite warnings that the modern structure would disqualify Dresden from UNESCO's World Heritage List. (2007.03.16)