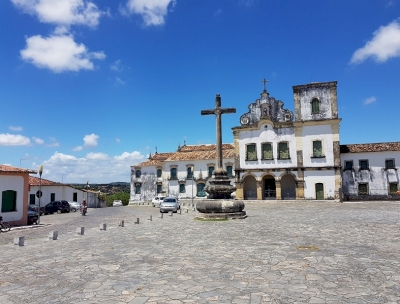 Franciscan Order: "The Franciscan complex is an example of the typical architecture of the religious order developed in north-eastern Brazil" (unesco website)

Built or owned by Portuguese: "it demonstrates the occupation processes of the region and the development of towns founded during the reign of King Philip II, during the 60-year period when Portugal was under Spanish domain" (AB ev)
Built or owned by Spanish: "Since the town of São Cristóvão was founded during the period when Spain and Portugal were ruled by the same Crown, Spanish codes for urban patterns were employed, especially the use of a regular grid" (AB ev)

Shoe covers required: In the Sacred Art Museum (part of the Franciscan church-convent complex), because of the original wooden floors on the upper level.