Kyiv: Saint Sophia Cathedral and Related Monastic Buildings, the Kyiv-Pechersk Lavra consists of a group of monuments known for their art, architecture and the spread of the Orthodox faith.

Kyiv's Saint Sophia Cathedral was designed to rival the Saint Sophia of Constantinople. Prince Yaroslav the Wise built it to commemorate the victory over the Pechenegs (Asian nomadic tribes) and to glorify Christianity. From here the Orthodox religion spread over the larger Russian world. The cathedral was built in 1037, and still stands proudly in the old city center. It is open to visitors, and services are held. 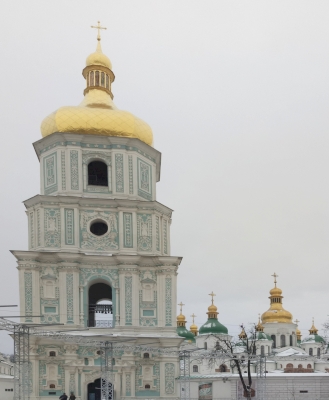 Having had lived in Chernihiv, Ukraine, over 18 months, I was compelled to do justice to Kyiv WHS, the country's most important WHS, by visiting all the associated sites, including the ones on the proposed extension, I had not visited before. (I had visited St. Sophia Monastery and Kyiv Pechersk Lavra in the core zone and St. Michael's Monastery and St. Andrew's Church in the buffer zone.) By doing so I have learned a little more about this WHS, and that is what I would like to talk about here.

WHS has to do with OUV and not with politics or religion. But I feel that visitors should at least know what they are visiting. I have encountered some foreign visitors to Japan who had no idea whether they were visiting a Shinto shrine or a Buddhist temple. One even thought that the Himeji Castle was a Shinto shrine!

The original St. Sophia (Hagia Sophia/Holy Wisdom) in Constantinople/Istanbul is now an Islamic mosque again. So what about St. Sophia in Kyiv? The importance of St. Sophia Cathedral in Kyiv, founded 40 years before Kyiv Pechersk Lavra, can't be exaggerated but today lies in the fact that it is sort of a neutral place of worship, as all major Christian denominations in Ukraine had made claims to St. Sophia Cathedral, creating much conflict. So it remains a museum today, just like St. Sophia in Constantinople/Istanbul was before 2020.

If you visit St. Sophia Cathedral in Kyiv, you would immediately notice another awe-inspiring monastery on the opposite end of Volodymyrska Passage. This is St. Michael's, the only major working monastery aside from Kyiv Pechersk Lavra in Kyiv, but is nowhere to be seen in the  proposed extension of this Kyiv WHS (although it is in the buffer zone). The origin of St. Michael's goes just as far back as St. Sophia, but St. Michael's was demolished by the Soviet in 1935 and was only reconstructed after the collapse of the USSR in 1991. (St. Sophia Cathedral was fortunately saved from the destruction by the Soviet.)  The reconstruction is one of the reason St. Michael's is not included in the extention, but there is another reason.

Generally, after the annexation of Crimea by Russia in 2014 and the war in the Donbas region, the tendency in Ukraine today is, unfortunately, to eschew anything Russian more and more, including religion and language.

Among the 3 locations of this WHS the only one I newly visited is the Church of the Saviour at Berestovo.  This Church is located just outside the wall of the Kyiv Pechersk Lavra but is considered a part of the Lavra.  The original church from the 12th century was destroyed by the Mongols and was rebuild to one half of the size of the original in the 17th century, incorporating some remains from the original. The foundation of the original church can still be seen outside of the current one. This church is considered quite important partly because the founder of Moscow, Yuri Dolgorukiy (1099-1157), is supposed to be buried here. 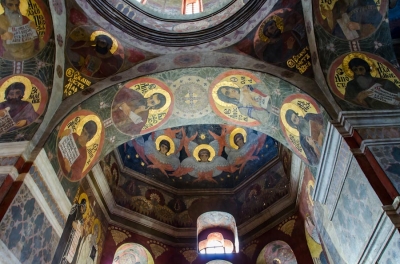 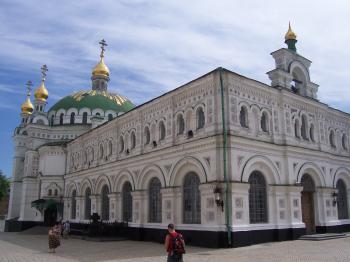 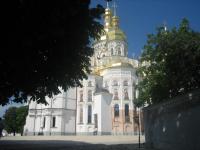 Sieges and Battles: Turcic Pechenegs 968 (lifted)
Byzantine Empire and Civilization: an outstanding example of Byzantine art ... a result of the cultural interaction of the Kyivan Rus’, the Byzantine Empire and Western Europe. (OUV)
Located in a Former Capital: Kievan Rus 882-1169

On Banknotes: 2 Hryvni (also Pechersk Lavra on 10 Hryven); 1992
Dubbed as another WHS: New Constantinople
One million visitors or more: Kyiv Pechersk Lavra attracted over a million tourists in 2011, reports the press service of the museum
In The Simpsons: “The Falcon and the D'ohman” (2011)